Abel also known as 0017 is one of the High-Teen Numbers cyborgs developed by Dr. Adams. He is often paired with John Cain Smith (0016).

Abel is a small boy with a round face, large ovaloid eyes, button nose, and long mouth. His deep bluish-black hair has a thick asymmetrical fringe that nearly falls over one eye, as well as a sharp ahoge sticking up in the back. For clothing he wears the High-Teen cyborg uniform, a black version of the 00 cyborg uniform with silver buttons, a white scarf, two white belts, and red seams. His civilian clothes consist of child sized clothes including jeans, sneakers, and a red hoodie worn over a white shirt.

0017 appears to be more curious and playful than his group-mates, likely due to his age. But in battle he is just as devious and driven as the others. He seems to like themes, particularly when facing against enemies his powers would have either an advantage or disadvantage against certain enemies, such as when Abel fought against 008 and tried to freeze him in water while playing around with 006. He is also reckless, shown when he charged headfirst into his former teammate 0018 when he became possessed by Atun with 0017 being killed. Among his group, Abel seemed to have been close with Cain, often being seen on Cain's shoulder and when Cain tried to avenge his death.

Being a High-Teen Number cyborg, Abel is equipped with an accelerator, allowing him to move a mach speed. He also possesses a self-repairing unit that allow his systems to be repaired while also tending his injuries. Unique to Abel is a cryokinetic power courtesy of being an Intentional Mutant with his cybernetics exploiting them for further use. This allows Abel to freeze objects, often manifesting as blue beams that come out of his hands. 0017 can also control the density and sharpness of the ice he creates including a giant ice prison that cannot be destroyed by Super Guns and large snowflake projectiles that can slice through reinforced clothing and even cut a person in half.

Abel was born in a top-secret Black Ghost facility in Canada along with Eva Maria Pallares and Set, being developed and modified for the High-Teen Numbers Cyborg program with Abel being the fourth in the series.

With the exception of Set (now 0018), the High-Teen Cyborgs traveled to Japan to collect data on the cyborg defectors from Black Ghost, the original nine 00 Cyborgs. 0014, 16, and 17 ended up fighting 002, 004, and 008 respectively with 0017 enjoying being able to showcase his abilities. Although victorious, 0017 leaves with the others under 0014's orders as they go the data they needed.

When the 00 cyborgs attack the Black Ghost base he is stationed at, 0017 went to battle with the others while fighting 006 and being put in a tight spot. Things only got worse when Devilman appeared fighting Atun who had overtaken 0018. When 0015 (Eva), tried to cure 0018 with her powers it actually combined them into a gestalt form known, Azazel. 0017, knowing this was not his teammate decided to attack the gestalt form but Azazel overpowered his snowflake projectile and shot it back at 0017, cutting him in half and causing 0017 to explode because of his damaged cybernetics.

About to lay down some cold beats 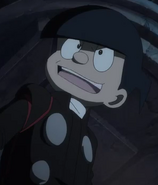 Add a photo to this gallery
Retrieved from "https://devilman.fandom.com/wiki/Abel?oldid=19884"
Community content is available under CC-BY-SA unless otherwise noted.