Warrior of the Gods

Evil
Adam was one of two titanic soldiers created to fight for the Gods, the other being his female counterpart Eve.

Adam resembled a massive muscular man with medium length hair and well defined features. His dark hair hung at a medium length. Shortly after forming he created armour for himself out of the ruins of Sodom, later after his death and subsequent resurrection his armour changed and became more futuristic, and applied large cannons to his solders.

Adam was a brash and cruel warrior, loyal to his creators and has no care or well being for humanity, killing them in ease. He did have at least some pre-established relationship with Eve, who vowed vengeance in his death. 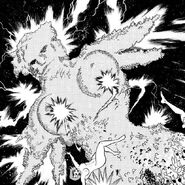 Adam and Eve begin to form
Add a photo to this gallery
Retrieved from "https://devilman.fandom.com/wiki/Adam?oldid=24838"
Community content is available under CC-BY-SA unless otherwise noted.