Evil
Agwel is a demon from the original Devilman manga. He, along with Ghelmer, where sent to run amok in the Makimura Residence after being summoned by Sirene.

Agwel is a small, slime-like demon whose only distinguishable features are his deeply sunken eyes, his mouth full of razor-sharp teeth, and a pair of antennae. Its body, for lack of a better word, was a grotesque translucent blob of slime, that melted and morphed at Agwel's will.

Agwel is able to render himself and his surroundings tangible and intangible at will. His large teeth are effective for biting opponents, particularly when they are restrained by him.

Agwel had a rather unique manner of speech, cruel and sadistic with an artistic flair. He frequently referred to himself in third person and had a manic glee in killing.

Before the decisive battle, the beautiful demoness Sirene summoned fourth both the blob-like Agwel and the reptilian water-demon Ghelmer.

As Ghelmer sped inside to attack Miki Makimura, Agwel set his sights on her parents, sucking Kozo and Akiko Makimura into the walls. Both of which are discovered by Tare Makimura, and then Akira Fudo shortly after. Akira tells Tare to hide in his room, hearing a shrill scream from Miki just after. Akira tries to break into the bathroom to save Miki, but found himself being sucked into the floor. Agwel introduces himself and cheerily threatens Akira, who beats Agwel back causing the demon to retreat.

After recovering Miki from Ghelmer's watery clutches, Agwel attacks again but Akira, who was in his mid-transformation, wrapped his antenna around Agwel's neck and with some force, pulled off the demons head. Agwel spurts out a final threat before dying, promising to meet his foe in the afterlife.

Agwel appears in a flashback of Akira's as he was reminiscing about past battles with Jun Fudo, Agwel could be seen alongside other demons such as Aleda, Wagreb, Gair and Trijask.

Agwel appears half fused to a wall

Agwel introduces himself to Akira Fudo 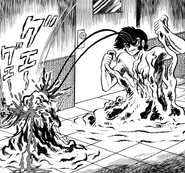 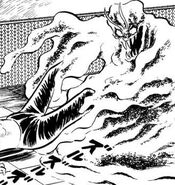 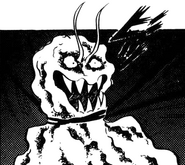 Agwel's head is torn from his body

A last haunting threat
Add a photo to this gallery
Retrieved from "https://devilman.fandom.com/wiki/Agwel?oldid=24121"
Community content is available under CC-BY-SA unless otherwise noted.