Neutral
Aoi Kurosaki was one of the main characters of the manga Devilman Lady. She developed schizophrenia at a young age, which manifested itself as her Devil form, which had distinctively male personality traits. She had a long standing history with Jun Fudo, made difficult due to her love for her and constantly shifting personality.

Aoi was a woman in her mid-twenties, she had a muscular build and loomed over other people, standing at least a head above them. She had brown eyes and short dark hair. Her initial Devil Beast form resembled a mutated great white shark with her body hanging out on top and tentacles, claws and fins spread across her body.

As Devilman Noir, she had a more humanoid form with black fur across her body and purple skin. She had sharp claws and a pair of mighty horns capable of cutting through flesh.

Aoi was a highly capable swimmer and fighter, this intensified in the Devil Beast form where she could breathe underwater and swim great depths, and her teeth and claws could easily prove fatal. Her second form, as Devilman Noir, allowed her to have heightened agility, super strength and powerful claws, the horns on her head could also be used to ram and throw her enemies. Aoi's Devilman factor was unique in that she unconsciously allowed her shifting personalities to change her anatomy with most of her body acting masculine save for her face and chest but could even grow a penis out of her groin area.

Aoi had a horrific childhood, after her first father died, she was constantly molested and eventually raped by her step-father, and saw nothing but scorn and bitter hatred from her mother. It was during her bitter experiences that she began to develop a secondary personality as a coping mechanism, unfortunately this personality manifested itself as a ravenous Devil Beast. This personality was distinctively male, very forceful and dominant. Her initial personality was more sensitive, she loved her lifelong rival Jun Fudo, though was never able to show it. This caused a conflicting and self destructive personality, eventually leading to her demise.

As a child, Aoi's father died in a accident and it wasn't long till her mother remarried. The man she married however, ended up molesting and abusing Aoi repeatedly as she grew, before eventually raping her, while her mother knew about the abuse, she did nothing and instead blamed her daughter for supposedly seducing the man and only saw hatred towards the girl.

It was during her rape that she began to develop schizophrenia, and her alternate personality was one that was afflicted with Devil-Beast genes. She began swimming and working out by a means of escapism, and eventually murdered her step-father in revenge for years of abuse.

Eventually she met Jun Fudo, who she gradually fell in love with. Unable to properly articulate her feelings however, her affection grew into bullying and the two became hardened swimming rivals. During one decisive match, Aoi beat Jun, leading to Jun retiring from professional swimming shortly thereafter.

Several years later after Jun had started a job locating and dispatching Devil-Beasts under the command of the H.A., the two women ran into one another again, when Jun was investigating a case revolving round the bodies of three mutilated swimmers discovered in the sewers beneath a local sports centre named Toriton's. It isn't long till Aoi is revealed to be the killer, though unwillingly, as her other personality having grown so much of a persona of its own, had fully developed in it's Devil-Beast genealogy, and grown its own separate shark-like body which could fuse away from Aoi. The shark urged Aoi to rape and murder Jun, sensing Aoi's buried feelings towards her.

After discovering Aoi to be the culprit, thanks to info given to her by her partner Lan Asuka, Jun confronts Aoi in Toriton's late one night. Aoi tires to warn Jun away as her inner demon forces out and begins transforming. As Aoi's body is ejected from the shambling shark-like thing, Lan Asuka arrives with back up on the scene. Jun transforms and combats the shark beneath the water, tearing of its upper jaw and killing it. Aoi goes catatonic and is taken into intensive care.

Jun Fudo having nightmares about Aoi 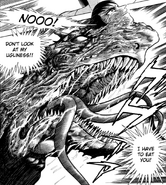 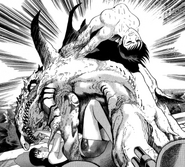 Aoi's body is rejected from the shark
Add a photo to this gallery
Retrieved from "https://devilman.fandom.com/wiki/Aoi_Kurosaki?oldid=26518"
Community content is available under CC-BY-SA unless otherwise noted.