Evil
Aponijittise was a minor character in the original Devilman manga. He was among the many demons to take part in Zennon's first global assault against humanity.

Aponijittise is quite short appearing to be a large slime like lump, demon similar to Agwel's, with a black pattern across his body and two tiny eyes. He has two large antenna above his head, that also act as his main weapons that are incredibly quick, agile and deadly.

While the main body appears to be slow in speed, it makes up for its highly extended antenna that were both incredibly strong and highly sharp, capable of cutting through flesh and bone with absolute ease.

After the demon lord Zennon announces the existence of the demons to the world as well as the plans for their upcoming attack a massive panic breaks out as demons assault humanity across the globe. Heightened after the demons descend upon the world.

Aponijittise was among the Tokyo Swarm attacking Japan. He was seen having broke into a family's house, first cutting through the neck of the youngest son, before spearing the daughter through the chest and into the head of the eldest son, killing them all, before approaching the mother and her baby. In a futile, and certainly selfish gesture, the woman throws her baby at the beast, who promptly cuts it in half in the air, before bringing down its might on the woman slicing her down the middle. The husband managed to escape and try to find help, only to be gunned down by a demon disguised as a policeman. 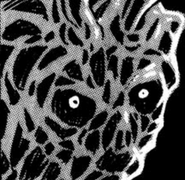 Aponijittise in it's grim glory 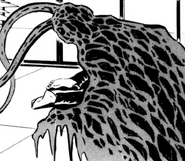 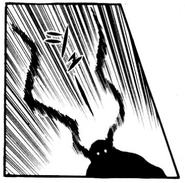 The demon whips
Add a photo to this gallery
Retrieved from "https://devilman.fandom.com/wiki/Aponijittise?oldid=25038"
Community content is available under CC-BY-SA unless otherwise noted.