Evil
Beeq was a massive fly-like demon that served a minor role in the origonal Devilman manga. He was among the massive demon armada that attacked Tokyo after Zennon had declared war upon humanity.

Beeq was a gigantic fly-like demon, he had a noticeably human face underneath a large fly face with large compound eyes. His neck was covered in ridges with a pair of tiny wings that somehow allowed him to fly. The rest of his body was covered in hair with long tufts on his tail at the back, he had large bird-like legs and massive skeletal arms equipped with large claws, he also had four small tentacles on his chest.

Beeq was able to fly using his wings, despite them being far to small to support his body weight, also despite never seen using them its likely that he would have been able to cause some considerable damage.

After Zennon had announced the forthcoming demon invasion across the world, it took only five minuets for a swarm of devils to begin descending down upon the cities of the world, killing and destroying all they could.

Beeq was among a gigantic armada of demons that attacked Tokyo after Zennon's mighty speech. As they devastated Tokyo, Beeq was caught on camera alongside Yageba and Orifang, by a news reporter who made document of their chaos and destruction. 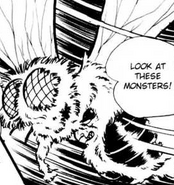 Beeq flies high in Devilman
Add a photo to this gallery
Retrieved from "https://devilman.fandom.com/wiki/Beeq?oldid=26722"
Community content is available under CC-BY-SA unless otherwise noted.