The Black Sabbath was a major event and location from the original Devilman manga, where Akira Fudo fused with the demon Amon.

Ryo Asuka arranged the Sabbath when he invited a large group of hippies, perverts, and general social drop outs to a party at his home. Later he brings his friend Akira Fudo to the Sabbath with the intention for them to both become Devilmen. Needing only to spill blood Ryo sets about killing his guests, until they start to fight back and both Ryo and Akira begin to get beaten themselves.

Luckily for them, however, the demons began to fuse with the guests, starting with the female demoness Welvath. Slowly more guests are transformed until a large majority have turned. After feeling little to no effect, Akira is suddenly grabbed by Wagreb. The fear he feals from this allows him to abandon his sense of reason temporarily, thus allowing him to fuse with the mighty demon Amon. However his pure heart successfully dominates that of Amon's and he becomes the Devilman. WIth his newly obtained powers, Akira slaughters the demons and rescues Ryo, albeit the latter was left in critical condition.

In this OVA, which largely follows accurately the events of the original manga's first volume, The Black Sabbath is also featured and Akira becomes Devilman in the process. It differs from the manga in that the Sabbath resembles more of a heavy metal rock concert rather then a go-go club, although the attendants behaved and dressed in provocative manner in the same amount as they did in the manga. Instead of a band performing the music it was provided by a surround-sound audio system. Aside from these changes, some demons were omitted from the event, while others took their place.

Amon: The Apocalypse of Devilman (OVA)

In this OVA, only the Sabbath's conclusion was shown via a recording provided by Ryo Asuka for the media. The events are entirely original, with Akira first having been beaten by demons who weren't present in any other adaptation of the Sabbath, and after fusing with Amon, Akira brutally rips-apart the breasts of a demoness and eats them. Just as in other versions, Satan mislead the events shown and as a result the Sabbath's broadcast fueled humanity's paranoia and led to rioting in the streets.

Amon: The Darkside of the Devilman (Manga)

This version of the Sabbath loosely follows the events that occurred in the original manga, however in this version there is the exception of a third survivor, a man named Cadney that later becomes a major antagonist in the story.

An event orchestrated by Sirene and her unwitting human servant Dr. Juzo Rainuma in which one hundred human sacrifices were summoned for a unholy party. At the point the Moon crossed the shadow of Mars, many demons began fusing with the party goers, and killing the humans that didn't fuse.

Although the Sabbath itself does not feature in this three-part crossover OVA a rather similar event occurs. In the first episode of the series a rave party is being held at a gas station just outside the city limits. At the rave the demon Lilith notices the party-goers' "sabbath like behavior" and uses their reverie in order to posses one of the party-goes and then immediately transforms the remaining people into her minions. The clerk working at the nearby gas station and convenient store is in turn possessed by the demon warrior Pazuzu. Also of note, during the second episode of the series Miki indirectly alludes to the events of the Black Sabbath while talking about Akira's personality change to Eva Maria Parallels.

Demons at the Sabbath Rave Party

Sabbath Parties were the latest popular thing among the dissatisfied youth of Japan, underground rave parties with an occult aesthetic. Ryo Asuka and Akira Fudo went to one held in a dilapidated old church, with the intention of fusing with demons. It went about as well as could be expected and most party goers ended up possessed by a demon or slaughtered by one. This was with the exception of Akira who successfully fuses with Amon where as Devilman he rescues Ryo and they both survive this incident. 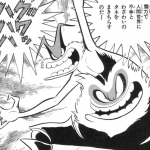 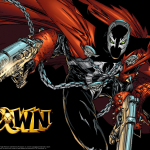