Dagon was one of Muzan's soldiers in the manga Devilman Grimoire. He is partnered with the spider-demon Adal.

Dagon is far smaller than his original counterpart standing roughly the same size as an average human. He has a large shell on his back layered in sharp spikes with a hollowed out whole at the top with a small face peeking through. Underneath is a large lipped fish-like head with massive eyes. He has stubby arms and legs.

Dagon has sharp claws, and few of the powers his original had. 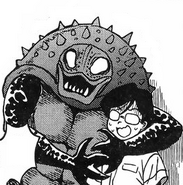 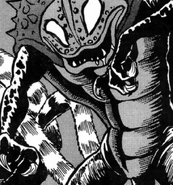 Add a photo to this gallery
Retrieved from "https://devilman.fandom.com/wiki/Dagon_(Grimoire)?oldid=25734"
Community content is available under CC-BY-SA unless otherwise noted.