Dante was the main protagonist of the Demon Lord Dante series. For the majority of the series he was under the identity of Ryo Utsugi, the reincarnation of his consciousness that was separated from his main body.

Ryo possesses two forms while transforming into the demon version of Dante. One is a human sized version reminiscent of Akira Fudo's Devilman form in the early anime/manga. His demon form however was far removed from Fudo's Devilman form. Utsugi's demon form features his hairstyle in a messier state, a pair of antenna coming out of his head, markings near his eyes, red eyes, blue skin, and a long tail.

Dante's true form is massive in size with dark blue fur across his body, he had bird like claws on his feet a massive pair of bat like wings attached to his arms and talon like fingers. A long tail that split off into three ends a short neck, he had large horns and a mass of long red hair from his head. He had large lips and massive yellow eyes, in between them was a small human face that was once his human face before he was transformed by God's energy.

Dante was capable of flight with his mighty wings. He was capable of great bounds of strength, able to lift and tear apart other demons effortlessly. He could teleport and emit rays from his eyes and could conduct electricity from his tail.

As Utsugi he was strong willed and was close with his sister Aya and best friend Sosuke Oshiba. In his true life as Dante he was equally as defiant at threats, and was in a sexual relationship with Medusa. He was best friends with Zennon and regretted deeply that he had to kill him.

He is named after Dante Alighieri, a Roman poet/author from the Middle Ages who wrote the divine comedy, including his most famous work The Inferno, a fictional story about how he envisions himself traveling through hell to reach limbo/purgatory, and then heaven, while being guided by the classical era Roman poet Vergil. Other media related to demons and Christianity have been known to reference Dante, most famously among them being the Devil May Cry video game series, featuring a white haired sword swinging cambion half demon protagonist who kills demons for a living, even having a twin brother named Vergil after the guide.

At first, Ryo is an average, but brooding high school student who constantly has nightmares about Dante and other Demons. When he is spirited away to the Himalayas during a hiking trip, Ryo is manipulated by Dante's demon form to free him resulting in Dante brutally murdering Ryo by eating him alive. Fortunately, Ryo is able to overcome Dante's influence and is granted the demon's power, much to Ryo's dismay. He also learns that he is actually the human avatar of Dante while assuming the image Dante once had as a human in Sodom. With his memories restored by Medusa, Ryo finally accepts being Dante and resolves to fight against God for the massacre of Sodom and Gomorrah.

Dante on the cover of the first volume

The first glimpse of the demon king

Dante, as Ryo Utsugi has nightmares about his fourthcoming awakenig

Utsugi has yet another bizarre nightmare

The true face of Dante

Breaking free from his tomb

Pinned down by "Judas" 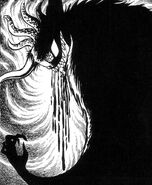 Dante is resurrected by the satanists

Dante struggles to understand what has happened to him 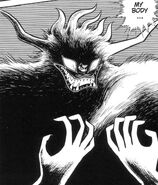 Dante walks through the ruins of Nagoya

Add a photo to this gallery
Retrieved from "https://devilman.fandom.com/wiki/Dante?oldid=25776"
Community content is available under CC-BY-SA unless otherwise noted.