None, but used a tank machine gun

Evil
Darak was a minor recurring antagonist in the original Devilman manga. He appeared as a member of the deadly Tokyo Swarm, taking charge of a military tank and using it to slaughter countless innocents.

Darak was a humanoid demon with a lizard-like head on the top of a long marked neck. His face had wide eyes, that were half covered when he wore his helmet and a large mouth with plentiful thin teeth. He wore the uniform of the soldier he fused with.

Darak showed no abilities of their own, but proved deadly when it used the tank's gun to mow down fleeing humans, and the heavy machine itself to run over and squash others.

After Zennon had announced the forthcoming demon invasion across the world, it took only five minuets for a swarm of devils to begin descending down upon the cities of the world, killing and destroying all they could.

Darak was seen hijacking the body of a tank controller, immediately attacking the other tanks, blowing them up with the tank cannon or using the inboard machine gun. Shortly after, Darak looses his helmet off panel, but refuses to halt in his attack on humanity, as he is seen mowing down a large group of fleeing people with the tank's gun.

Afterwards, Darak drove a tank through a building and crushed several panicked people against a wall, squashing them to death. 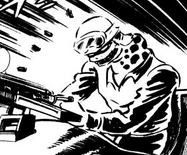 Darak with his helmet on, in Devilman 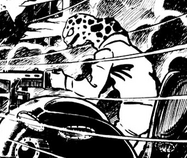 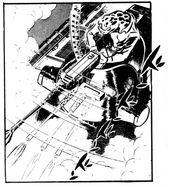 Darak fires his gun
Add a photo to this gallery
Retrieved from "https://devilman.fandom.com/wiki/Darak?oldid=25791"
Community content is available under CC-BY-SA unless otherwise noted.