Revival of the Demon Tribe

Evil
Daruni was one of Zennon's three bodyguards and was a minor antagonist in the very first episode of the Devilman anime series.

Daruni was a massive, fat demon with yellow eyes and navy blue skin. He was covered in a slime-like substance.

Daruni seemed to posses a great quantity of strength.

Daruni was summoned by Lord Zennon, alongside Devilman and Rerasu. After Akira Fudo and his father had fallen into a crack in the ice and at the feet of the demons, Zennon kills them and commands his three bodyguards to fight to the death over ownership of Fudo's body. The winner would have been allowed to go fourth and cause widespread havoc.

Devilman sets about fighting the two and after a short tussle he throws Daruni on some low hanging Icicles which spear through his chest. 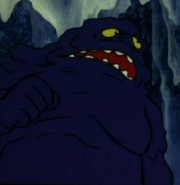 Add a photo to this gallery
Retrieved from "https://devilman.fandom.com/wiki/Daruni?oldid=24882"
Community content is available under CC-BY-SA unless otherwise noted.