Start a Wiki
The Demon Bible was a book published in 1990 by the company Bandai as a part of the Bandai Entertainment Bible series. It contained extensive information on the various different demons from Devilman, Shin Devilman, Demon Lord Dante, and Barabanba all of which are by Go Nagai.

It includes in depth and previously unpublished information on the demons, each being named, a overview of their weight/height and powers, as well as a brief entries about them. Many of these demons were previously unnamed and was an extension on the book THE DEVILMAN which named several previously unnamed demons which the book also takes art from.

It should be noted however the book leaves out several demons due to limited space meaning a large number of the demons are named in other sources or remain unnamed, it should also be noted that the book has no information on the specific Devilmen but rather the demons they fused with. 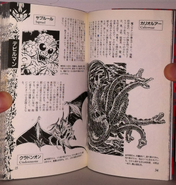 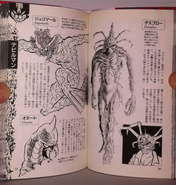 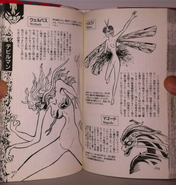 Add a photo to this gallery
Retrieved from "https://devilman.fandom.com/wiki/Demon_Bible?oldid=23394"
Community content is available under CC-BY-SA unless otherwise noted.