Originally, the demons were indistinct in appearance from humans. But after God's attack, some of them mutated into vastly different unique shapes due to their ability to fuse with living tissue of other lifeforms and inherit their various attributes through atavistic evolution.

Demons as part of their life in the prehistoric era, adopted a law of the jungle attitude that very few do not follow, killing off anyone who oppose them even other demons. As a result many demons see themselves as superior lifeforms. Some demons group up with others under powerful beings like Zennon while others like Amon and Jinmen act independently while having assistance from others when it suits them.

In general the demons have superhuman strength and durability, but more specific abilities varies from demon to demon. Following their first imprisonment all subsequent demons have the ability to merge with other creatures. This is not limited to animals either as some demons had merged with plants. At times, demons can also merge with machines.

Because their abilities are on a cellular level, they can also shapeshift to mimic the appearance of humans. A few demons have limited psychic abilities that allow them to take over bodies of their choice and dominate hosts full of weak will and wicked desire. While there are both male and female demons and can love, it is unknown if they can reproduce.

Although they were created by God, he at some point decided to destroy them. On contact with God some of them, including Medusa, transformed; becoming a race of apex predators which could only evolve by possessing other lifeforms, including each other. This drove them into cannibalism in a bid for survival; devouring both their own kind and other lifeforms in the process. Eventually God placed the surviving demons inside a mountain.

Because of the harsh conditions within the mountain the demons became violent and evolved specialized fighting abilities. Eventually they grew the ability to merge which allowed the current demons to combine their strength and escape. Their abilities are revealed to be from genetic experiments from an unknown time before.

After the demons had repopulated the earth God decide to use his angels to wipe them out again. However, Satan, God's Divine Prince has rebelled against his/her father and sided with the demons. Ultimately God is victorious and the demons, along with Satan, are once again sealed inside a mountain.

The demons break free from the mountain and start merging with humans. However some of the humans retain the personality afterwards, creating devilmen. The demons try to wipe out humanity and reclaim the earth, but the devilmen rise to their defense. Ultimately all three races are obliterated. God places the souls of the demons and devilmen in Hell.

God tries to recreate the earth and humanity. However, similar Devil Beasts have appeared, possibly with help from Satan and factors that created the first demons. Maria and Judah, two parts of the Demon Lord Zennon escape Hell and possess human hosts. They lead Ryo Utsugi to Hell where he merge with the remains of Zennon's body, giving it physical form and becoming Demon Lord Dante. Dante escapes Hell, bringing the souls of the rest of them demons with him. On earth the demons start mass-merging with the humans and the devilbeasts. The Devilmen and human-aligned devil-beasts, led by Akira Fudo, join forces with the demons and demon-aligned devil-beasts, led by Satan, to battle God and his angels. The outcome is not revealed.

"the demons. the countless demons" 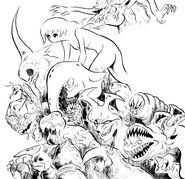 A wave of devils 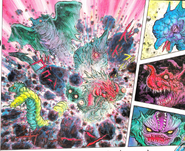 A group of demons attack God's people in Demon Knight 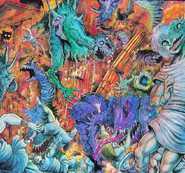 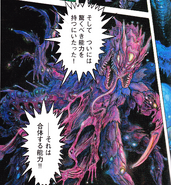 Add a photo to this gallery
Retrieved from "https://devilman.fandom.com/wiki/Demons?oldid=25368"
Community content is available under CC-BY-SA unless otherwise noted.