Revival of the Demon Tribe

Good
Devilman is the main titular protagonist of the original Devilman TV series. He was originally sent to pave a way of destruction for the Demon Tribe. However he fell in love with the human girl Miki Makimura and instead of being humanity's destroyer, he became its savior.

Devilman usually used the appearance of the human boy Akira Fudo. However his true appearance was a large blue skinned humanoid. He had black bat like wings on his head with red markings under his eyes. His retractable wings were large, axe shaped and red. He also has two red marks or scars across his chest and back.

The television version of Devilman possesses a variety of strange powers.

His other powers include superhuman strength and speed, a healing factor that makes his cells regenerate at amazing rates and even allows him to grow back limbs in a matter of hours, and high resistance to heat and acids except for his wings. In the television series he could use echolocation to locate his opponents, survive in space for a certain period of time, and could change his size, usually being around 20 feet tall. This tied into a weakness of Devilman, where injuries he sustained as either a human or in a smaller form would become worse in giant form.

Devilman was originally an arrogant and cruel demon, even when he first met Miki and was getting associated with his new life as Akira he was cruel to those around him. He did soften somewhat after the death ofLita one of his hero's and later after Miki is put in hospital by Demon General Zannin he realizes how much he actually loved her and in a furious rage killing both Zannin and Himura. Not much later he is forced to kill his best friend Dorango, afterwards he becomes far friendlier to his friends and family. 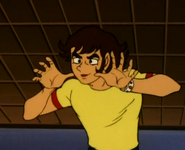 Early Design, later reused for Baryi
Add a photo to this gallery
Retrieved from "https://devilman.fandom.com/wiki/Devilman_(TV)?oldid=27701"
Community content is available under CC-BY-SA unless otherwise noted.