Dremoon was the second to last antagonist of the Devilman (TV) series appeareing in episode 38. He was dragging the Moon closer and closer to the Earth, causing the tides to rapidly go out of control and planned to make the moon crash into the Earth so the Demon Tribe could reign supreme.

Dremoon was an oddly human demon who wore clothing. He had blue skin and a large shark finned style haircut and spiked sideburns. He had yellow eyes, and a pair of short spiked teeth. He wore white gloves and large red boots. Red shorts, and a massive collard cloak with a purple inlay. On his chest was a large circular shape on his stomach resembling a Moon.

Dremoon's most prominent power was to emit powerful black holes from the circle on his stomach. He was also able to fly and survive outside in the harsh atmosphere of space.

Dremoon was a spiteful and vindictive demon, however he was confident of his power which partially leads to his ultimate downfall.

Dremoon was sent by Zennon to try and rid the world of its human population. To avoid detection, he hid behind a satellite. There he began to pull the moon closer and closer to the Earth slowly. This caused the Earth's tides to go rapidly out of proportion, with countries like America going into drought, and numerous cities in Japan suffering from storm surges whenever the tide rose.

Meanwhile Devilman, unsure as to what demon was causing the flooding, thinking it may have even been Mermane a demoness with control over water who he had previously encountered. However when Miki tells him that the floods were due to the Moon having edged closer and closer to the planet, Devilman realises his foe to be Dremoon and goes out into space to try and find him.

With little luck after searching through space for several hours, he finds Dremoon hiding in the satellite and splits it open revealing him inside. Dremoon unleashes the black hole on his chest and begins to suck in the satellite wreckage and various parts of space debris. Realising that he would be torn into pieces if he got too much closer, he unleashes the Devil Arrow and causes Dremoon to absorb the energy and momentarily loose concentration allowing for Devilman to sneak behind him. In a panic Dremoon unleashes his black hole, but the energy inside him caused him to fold inside of himself and implodes. 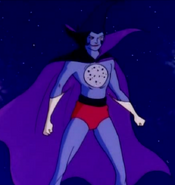 Add a photo to this gallery
Retrieved from "https://devilman.fandom.com/wiki/Dremoon?oldid=25758"
Community content is available under CC-BY-SA unless otherwise noted.