Evil
Eader was a large humanoid mammalian demon who appeared several times in the Devilman manga. Despite his short appearances both times he showed up, it is in his final scene that the first hint as to who Ryo Asuka really was is given.

He slightly resembled a cross between a rat and a dog, He was covered in thick fur, had a short tail, and had a horn in the centre of his forehead, large arms and legs, large pointed ears, and his chest has a large pair of eyes.

Eader had a large amount of strength, being able to tear a human to pieces with his bare hands, he was also fairly agile.

Eader was a complete and utter sadist. He took a sickening pleasure in the killing of humans before he ate them bearing a similarly to Jinmen, the only difference being that Eader failed to ever be discreet about his killings.

The first time Eader is seen he had slaughtered a young woman and had scattered her body parts across the road. When a pair of Truckers see the body parts and crash into a building, Eader watches with a gleeful smile as he feasts on the woman's arm.

Later on after the death of Sirene, Eader is seen in a human form revealed to be named Maegawa, eating in a restaurant with another demon in a human's form. The two gleefully congratulate themselves on the dozens they had slaughtered, and Eader goes on to tell him of his first kill, a high ranking man in his office. However he failed to dispose of a body which was found and launched into a full blown police investigation, because of this he got a scolding from one of the demon generals.

The two part ways, however as leaves the restaurant he finds himself being tailed by a blonde haired teen. Eventually they leave the mass of people in the city into a small back alley, where the figure who turns out to be Ryo Asuka confronts him. Asuka assaults Eader, where it revealed that Eader had slaughtered Maegawa's wife and child, eventually Eader transforms and prepares to attack. But he stops in his tracks and recognises him as someone else before Ryo blacks out. When Asuka awakens, he finds Eader's shadow engraved onto the street. He later tells Akira about the event, however Akira only scolds him for being so stupid and says the demon probably gave him the slip. Despite this, Ryo still had his doubt about the event. With the revelation that Ryo Asuka was in truth the fallen Angel Satan it can be assumed that Eader was murdered by Psycho Jenny, or perhaps even the subconscious of Satan himself.

Eader chews on a arm in Devilman 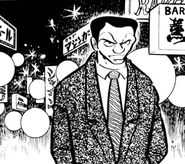 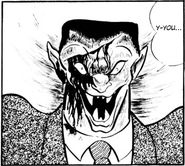 Eader tears from his suit 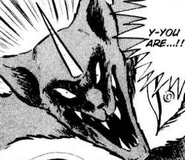 Eader realises who Asuka really is

Eader's remains
Add a photo to this gallery
Retrieved from "https://devilman.fandom.com/wiki/Eader?oldid=24199"
Community content is available under CC-BY-SA unless otherwise noted.