Teleport through mirrors, control arms of those around her, horns

Evil
Ebain is a female centaur-like demoness that appeared in the Devilman. She was sent by Muzan to slay the demon traitor Devilman.

Ebain has the lower body of a horse, whilst the upper body is human. She is covered in a light brown fur except for the face, neck and cleavage and a yellow tuft around her neck which conceals her breasts. She had long messy black hair, large horns, and her arms consisted only of shoulders and axillary muscles with no elbows or hands.

Ebain could teleport through any reflective surface and could control the arms of anyone who saw her. She could charge with her horns and manipulate the disembodied arms of her victims to attack foes. With Muzan's aid, she was also able to pull people into her mirror universe, where she could increase in size greatly and overpower her foes with the arms of wrestlers, boxers, soldiers and even murderers.

Ebain took pleasure in causing death and destruction, having a very sadistic personality.

Ebain was causing destruction around Japan when she came Nakado Academy, where she attacked several of the teachers. This attracts his attention of Devilman, who was posing as a student. Devilman finds her hiding in a mirror and smashes it, forcing her out. Fearing for her life, she flees for safety, making it back to her master Muzan. Having realised that Devilman knew each demon's weakness, due to him having been Zennon's bodyguard prior to his betrayal, he gives her a special Key that would allow anybody to become trapped in the mirror universe, leaving them at her mercy.

With her newfound abilities, she goes to the Makimura house and shows herself to Devilman, taunting him. He retaliates by smashing the mirror, not realising what would happen, as the key flies out and locks the door, trapping him in the mirror universe. She comes down to him at a gigantic size and attacks him, kicking him around before he too grows to a giant size. Though he is put at a disadvantage due to a prior injury. She summons millions of arms from which she had torn off from fighters, murderers, soldiers and so on to attack Devilman.

The arms hold him in place and Ebain charges down and attacks, but he kicks up and cracks her horn. He then escapes the arms, before finally stabbing her in the eye with the broken horn, severing her ability to control the hordes of arms. He then leaves as the universe as an entrance opens, before briefly turning to see the thousands of arms attacking Ebain as she dies slowly and painfully. The mirror universe then collapses into a single broken shard of glass as her body floats slowly across it for eternity. 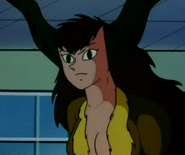 Ebain's human form
Add a photo to this gallery
Retrieved from "https://devilman.fandom.com/wiki/Ebain?oldid=26753"
Community content is available under CC-BY-SA unless otherwise noted.