Start a Wiki
watch 01:56
Who is Edward Adams Teufel?
Do you like this video?

Edward Adams aka Cyborg 0014 is the leader of Dr. Adams' "High-Teen Number" Cyborgs and an antagonist in the three part OVA series Cyborg 009 vs. Devilman.

Edward had a tall and slender frame with dark red hair in a spiked fashion from the sides of his head. Like the other "High-Teen Number" Cyborgs his uniform is made of tight fitting black cloth with red trimmings and four large gray oval buttons on the chest. He wears knee length boots with red trimming, and a long white scarf around his neck.

Initially, he is seen wearing a white jacket, black shirt, and white jeans, and greets the cyborgs while incognito, before throwing off the clothing to reveal he was actually wearing the combat uniform underneath all along. This is an in-joke to similar "quick changes" performed by the 00 cyborgs in the 1979 series, as well as some scenes with 009 transforming in the manga.

Edward had an inbuilt Accelerator and self repairing abilities. When using his accelerator, the seams on his uniform would glow red. 0014's accelerator seems to be the most powerful as he is able to use this acceleration to escape quickly, seemingly teleporting away due to the speed. Combined with the self repair functions, 0014 possesses powerful stamina allowing him to use his accelerator for an unlimited amount of time.

Edward is prideful and relentless in his fighting ability, attacking as hard and quickly as possible to not give his opponents a chance to fight back. He won't back down from a fight easily, and is hot-headed, going as far as to attempt to punch Ivan/001 and not realizing the other has teleportation powers to evade him.

However, he would appear to have had a deep respect for his father for having saved his life, and is upset to hear that his father had been murdered by another High-Teen Number cyborg. With his father's death, 0014 decided to continue his father's research after dealing with the proto-number cyborgs and the rogue 0018.

He is most seen with Cain and Abel, with them functioning as a powerful trio that play dirty.

Prior to being a cyborg, Edward had been a university graduate and assistant to his father, the Black Ghost scientist Adams Teufel. Unfortunately, tragedy had struck one day when Edward wound up mutilated in a laboratory accident, with his father also losing an eye as a result.

This accident would lead to Adams taking his son and using him as his first cybernetic experiment, and Edward was christened "0014" of Adams' "High-Teen Number" cyborg line.

When the 00 cyborgs 002, 004, and 008 went to investigate reports of demonic activity in Japan, they were observed by 0014 and his teammates 0016 and 0017. The three enemy cyborgs would engage in a quick, rough battle with the Black Ghost defectors, but would soon depart. Edward stated to everyone that their purpose was simply to collect data on their techniques and was interested in seeing how the whole group functions.

By the third episode, the High-Teen Numbers are seen once more encountering the 00 prototypes outside Dr. Adams' base, and engaging them in a longer, more drawn-out and brutal battle as they were facing the whole team. Edward would get into a clash with Joe/009, picking him as his new target for most of the fight. He would also learn that his father had been killed by his teammate Set/0018, now possessed by a demon named Atun.

During the final stages of the battle, Edward and the other's self-repair functions were disabled by a surge of negative energy. The fight had become even more complicated due to the involvement of Atun, the Set/Atun hybrid would evolve to a stronger form dubbed Azazel and slaughter Abel, followed by Cain. Edward would attempt to attack the enemy in revenge for his fellow cyborgs and his father, but would be violently thrown around by the demon's psychic powers, which resulted in significant damage to his cybernetics. The killing blow would ultimately be a massive bolt of lightning that destroyed Edward from the inside-out. He plummets to the ground in writhe lamenting on his end, before dying in agony from all the damage sustained. 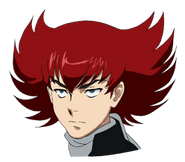 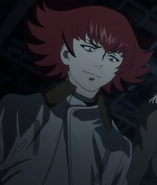 The High-Teen Cyborgs
Add a photo to this gallery
Retrieved from "https://devilman.fandom.com/wiki/Edward_Adams_Teufel?oldid=19893"
Community content is available under CC-BY-SA unless otherwise noted.