One Hand is Enough

Gabi is a character in Devilman Crybaby. He is part of a group of rappers alongside Wamu, Kukun, Babo, and Hie.

Gabi is tall, has darker skin, and is usually seen wearing red. His hair is in dreadlocks and tied into a ponytail, and two bands are tattooed around his right bicep.

Gabi has a bold personality and does not shy away from acting in a brash or aggressive manner, such as by grabbing and yelling at a bystander to insist he is not a thief.  Despite this, he is good at heart, and loyal to a fault for his friends. He is also a talented rapper and physically strong.

Gabi is shown in scenes rapping alongside his friends. He first appears while rapping with them at the dock after it had been repaired from the damage Ryo Asuka caused. The group is confronted by Akira Fudo and they are easily knocked into the water when they try to threaten him.

He later appears alongside the group trying to locate Kukun, who they have lost contact with after he went to Sabbath with Miki Kuroda. They spot a boy who looks like Kukun at a clothing store, who then falsely accuses them of robbery. Gabi defiantly insists that it is a lie, but the store clerk calls the police after seeing Gabi's tattoo and the group is held at gunpoint. They are let go when Miki Makimura steps in.

During Koshien Track and Field, he and Wamu watch the event, during which he teases Wamu about being interested in Miki and admits that he is, too. They soon witness the carnage at the stadium caused by Moyuru Koda.

When society begins to fall apart after Ryo reveals the truth of demons to the world, Gabi, Wamu, and Hie save Miki from a group of attackers. They run away and advise her not to walk alone, and she allows them to stay at her house.

The Makimura household is later attacked by a mob, and Gabi helps Wamu fight off the intruders. As he wears out, he is confronted by his friend Babo, who points a knife at him. Gabi does not resist and is stabbed in the chest. He is grabbed from behind as more knives are plunged into him.

The mob brutally murders him alongside Wamu, Miko, and Miki. His dismembered remains are later shown being waved around on sticks by the killers. When Akira arrives upon the scene, he incinerates the mob. 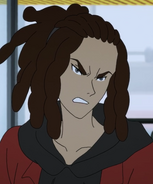 Add a photo to this gallery
Retrieved from "https://devilman.fandom.com/wiki/Gabi?oldid=24304"
Community content is available under CC-BY-SA unless otherwise noted.