Ghelmer is a demon from CB Chara Go Nagai World.

Ghelmer is a small demon who resembles a lizard-like goblin. He has big green pupil-less eyes, skinny limbs, large bat wings on his head, and a slug tail. His skin has a light blue coloration while his lower body is covered in purple patches. As part of Sirene's plan to ambush Devilman, he disguises himself as Miki Makimura, wearing a brown wig and her dress.

Ghelmer could manipulate water, as well as fuse with it. It should also be noted he was a master of disguise.

Ghelmer is one of Sirene's minions. He kidnapps Miki Makimura in his water form, while she was sleeping near lake with Akira, Ryo and Jinmen. He later was disguised as Miki to lure Akira to the top of demons' ice tower.

At the moment Akira finally gets to tower's top, Ghelmer is frozen to the state he's unable to move, so Akira warms him up with his heat palm in hope that demon will tell where is Miki. Instead of being tankful and help Akira, Ghelmer starts taunting Akira to make him transform into Devilman.

When Sirene reveals herself and starts comforting fevered Devilman, bored Ghelmer sits at the edge of the tower, getting sick of their cutesy. 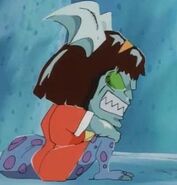 Add a photo to this gallery

Retrieved from "https://devilman.fandom.com/wiki/Ghelmer_(CB_Chara)?oldid=22637"
Community content is available under CC-BY-SA unless otherwise noted.