Ruler of the kingdom of Heaven

Evil
God is the central antagonist of the Devilman series although he has very rarely appeared, often being mentioned or sending his soldiers in place of him.

In Devilman, he is summoned when a group of Angels form together into the heavenly creature. He wore golden armor covering his body, he had large white eyes and hair also shaped like wings, unlike most Angels he only had a single pair of wings.

In the dream story Demon Knight, he appears significantly different, resembling an elderly man with a white beard and large golden armor.

The true extent of God's powers are never fully shown however he is omnipotent being that could manipulate reality and time around him to fit how he liked, even create new timelines, worlds, universe and multiverse. He is seen carrying a sword which presumably held much power.

Despite never getting a speaking role, God's thoughts and opinions are conveyed several times, mostly through backstory told by Satan. He created the Human race and was enraged when he discovered the sub-race of the demons, thinking them to be abominations he tried to wipe them out. After his own child Satan was forced to kill their best friend and love, Akira Fudo, God threw him and the demons and devilmen into Hell, a dimension he had originally created for the Titans, a race that predated both man and demon that had tried and failed to rebel against god.

As the Angels descend upon the Earth they are suddenly attacked by a mass armada of Demons led by God's son and traitor Satan who proceeds to butcher the Angels. The surviving Angels group together and summon God. He and Satan battle briefly before Satan sends him/herself and the entire Demon race into hibernation. Millions of years later not long after Zennon's speech to the world a demon named Medoc possesses the president of the USSR and planned to launch a barrage of nuclear missiles to destroy much of the world. However, this is averted when God comes down in a massive ball of light and turns the entirety of Moscow into salt.

After Satan had completely obliterated the world wiping out humanity and being forced to kill their love Akira Fudo, God decides to put Satan in Hell for punishment. However at one point Satan escapes the inferno with the help of Psycho Jenny and splits themself into two separate bodies Lan Asuka and Jun Fudo and has their previous memories erased. God sends his other child, Archangel Mikael to find them. After the dead had returned from Hell, Akira Fudo finds Satan and the two of them join forces and battle against the forces of God, the outcome of the war is unknown. 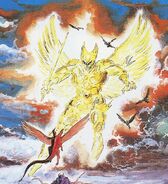 God fights against some Demons 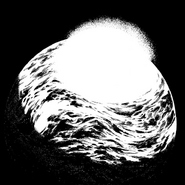 The light of God

A pillar of salt

God departs Earth as the forces led by Akira Fudo and Satan approach for a final battle
Add a photo to this gallery
Retrieved from "https://devilman.fandom.com/wiki/God?oldid=27081"
Community content is available under CC-BY-SA unless otherwise noted.