Illuge(イルーゲ) was a demon who served Sirene and was a recurring antagonist in the Devilman Grimoire series. She fused with a woman named Sachi Iruma(入間サチ) and frequently worked with Aleda and Wagreb.

Illuge has the body of a beautiful woman with long split black hair, her arms form into wings and she has a second face in her crotch area with a gaping mouth, sharp teeth, and a long tongue.

Illuge could fly using her wings and use the sonic screams projected from her crotch area powerful enough to shatter glass. 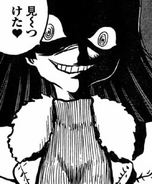 Nemu and Sachi leading a small armada of flying demons while riding on top of Agira. 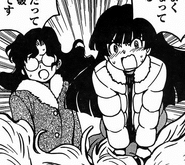 Nemu and Sachi panicking when Devilman begins tearing through their airborne army.

Aleda and Illuge as maids 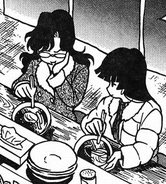 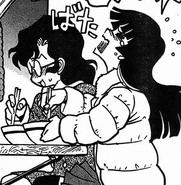 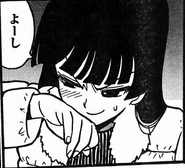 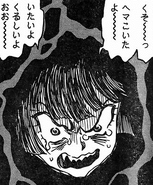 With Jinmen dead, Sachi can now rest in peace.
LetsCheeseIt.png
LOLSeeULater.png
Add a photo to this gallery
Retrieved from "https://devilman.fandom.com/wiki/Illuge_(Grimoire)?oldid=23391"
Community content is available under CC-BY-SA unless otherwise noted.