Imclugent was a massive fusion of demons led by Illuge and Aleda.

Imclugent appeared to be somewhat inspired by Zennon possessing a similar face on the chest. However the majority of its appearance is shared with its original counterpart with four large wings and claws, two long tails and a massive center head on a long scaled neck. The head has a large beak, sharp teeth on the main head, two demonic faces for eyes and a forked tongue. The left head was Aleda and while the right was Illuge.

Imclugent could fly at great speeds, had a great amount of strength, and was able to fire a massive sonic beam. 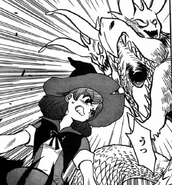 Imclugent's gooey demise
Add a photo to this gallery
Retrieved from "https://devilman.fandom.com/wiki/Imclugent_(Grimoire)?oldid=27142"
Community content is available under CC-BY-SA unless otherwise noted.