Iwao Himura, also known as Himmler, was a major supporting character in the original Devilman anime series. He was sent to assist Zannin and his demon subordinates on Zennon's orders, and led several attempts to try to defeat Devilman. He is one of the more fondly remembered characters despite appearing in only a small amount of episodes.

Himmler's true demon form was that of a large blue bat like demon with a cat like head and horns. However the form he seemed to prefer was his human disguise. As Himura, he resembles a late teens boy with brown hair and spiked sideburns, blue jeans a white t-shirt with blue stripes, and a blue scarf. At times he also wore a bikers jacket with a black skull on the back.

Himmler was not a strong demon, with his only powers being able to fly, use a human disguise, and emit a black fog from his mouth to distract enemies. As Himura, however its shown he was a skilled biker, fighter, and even an artist.

Himmler was a bit of a troublemaker, however he was intelligent and cunning. He used his charms to get close to Miki Makimura to make Devilman jealous. However during Devilman's confrontation with Gondoroma he seems to show genuine feelings for her, which were a bit more sincere than before. Himura also seemed to have feelings for the demoness Lafleur, as he vowed to avenge her after she was defeated by Devilman. 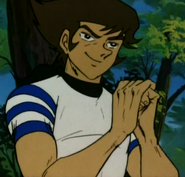 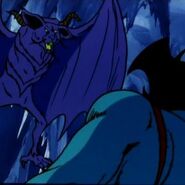 Add a photo to this gallery
Retrieved from "https://devilman.fandom.com/wiki/Iwao_Himura?oldid=26000"
Community content is available under CC-BY-SA unless otherwise noted.