Evil
Jinmen was a large sadistic turtle demon that would not simply kill his victims, but made them part of his shell to gain pleasure from their suffering. One of his victims was Sachiko, a young girl who was a friend of Akira Fudo's which brought them into conflict. Jinmen's cruelty and deviousness had made him one of the most recognisable characters from the Devilman franchise, appearing in many works since.

Jinmen resembles a large bipedal turtle with a forked tongue, and a noticeably muscular physique. Jinmen's shell at times appears a regular shell seen in some artwork and overtime, but the pattern changes when Jinmen devours a lifeform (human, demon, etc).

After some time in Hell his powers intensify as does his appearance: his shell becomes more spiked and his eyes more circular. He has several spikes and horns growing out of his head, as well as a larger and more visible beak.

Jinmen is easily one of the most sadistic of the demons encountered, taking pleasure in the suffering of enemies and anything he deems below him, even other demons. Yet Jinmen is willing to work with other demons to suit his own ends until he is finished with them.

Rather than just kill enemies; Jinmen likes to torment them psychologically and physically, keeping faces of his victims on his shell to hear their screams and using the relationships those victims had with other people to his advantage when attacking. But when losing his advantage, Jinmen is shown to be rather cowardly begging his adversary to spare him by testing to their good will. All of this in mind, Jinmen is quite easily one of the truly evil and maniacal characters of the series, whether human or demon.

Jinmen's possesses impressive strength, able to effortlessly hold a regular sized human with just one hand. His durability is also high, partly because of his rough skin and shell also make him resistant to most external forces.

As a member of the Demon race Jinmen can physically combine with living tissue and possessing minor shape shifting abilities. Jinmen's unique ability is to physically devour living beings and add their faces to his shell. As the faces are able to able to function through Jinmen's shells, Jinmen can use them as shields and psychologically attack his enemies with their moral code. After a while, the faces fade away but the victims souls are apparently trapped inside of him.

He was able to extend his arms, legs, and neck. Jinmen could also burn skin simply by making contact with the palm of his hand. He is able fold in his legs and fly at great speed by ejecting flames from his shell. After spending years in Hell Jinmen learned many new powers among them was the ability to emit powerful rays of lighting that would explode on impact and how to spin his shell while in flight to allow him to fly at higher speeds.

While the young girl Sachiko is on her way back from the Makimura home on the underground train when she notices the tunnel turn into a cave. The train's guard comes in revealing that they are inside a living being before revealing himself as Jinmen. Along with another demon named Aleda, Jinmen proceed to slaughter and eat all the passengers of the train.

Almost immediately the disappearance of the train was reported to the news. Akira gets a phone call from the turtle demon who informs Akira on how tasty the girl was before telling him to meet him at a local park. He does so only to find the face of Sachiko crying and screaming; slowly more faces start to appear and eventually, so does Jinmen. He taunts Akira asking if he liked his shell, initially confused Akira asks what the demon meant. The demon laughs at that and comes into the light revealing his shell. He explains how his shell worked and that soon Sachiko would just become another consciousness inside his body among many before her.

Akira transforms into his Devilman form and the two begin to fight. Jinmen quickly wraps his extendable neck around Devilman's body and burns him with his palms. Jinmen, thinking that Akira was weak mocks him, but Akira tells Jinmen he wanted feel the smallest bit of what Sachiko felt when Jinmen had killed her. He breaks free of the turtles grip and fires at Jinmen with his electrical bolts. However when doing so Devilman accidentally hits one of the faces on Jinmen's shell killing them. Jinmen laughs at him telling him the faces on his shell were still technically alive and would still feel pain. Jinmen continues to manipulate Akira's emotions before leaping up with his jets and tries to ram him with his shell. Sachiko however yells for Akira to kill her to kill Jinmen and be free of this fate. Regrettably, Akira does so punching Sachiko through the head and through the stomach of Jinmen.

Sprawling about in terror and pain Jinmen attempts to flee but Akira grabs his shell and pulls him to the ground. Jinmen begs for mercy but Akira ignores his pleas. Jinmen says to him that if he were to die so would all those on his shell; but his pleas goes unheard as Akira rips Jinmen in half, pulling his shell from his body. As Jinmen dies, the faces trapped in his shell die with him too.

Jinmen appears in hell among the countless other demons slain by Akira as Devilman. He meets up with Sirene and Vlava and they all go out and attempt to kill Devilman. Later Jinmen attacks Akira and Jun Fudo, showing off some impressive new abilities such as flight and has a section in his shell that stored other victims of Jinmen with a massive face that could fire electric beams. While fighting, Sachiko who was still on Jinmen shell screams at Devilman demanding to know why he tore her face off. Devilman hesitates and is shot with one of Jinmen electric beams. The fight continues but Devilman eventually gets the upper hand and smashes Jinmen onto the ground, decapitates him, tears his chest open and smashes through the massive face, then blows him up with his Devil Beam. This sets all the souls Jinmen had eaten free. Not long after Jinmen was reincarnated as a tiny small turtle, Jun tries to pet it mistaking it for a real turtle but Akira simply smashed the turtle with a rock.

Later after the demons had escaped from Hell due to the release of Dante, Jinmen is seen flying along the sky emitting lighting from his chest.

Jinmen disguised as a train gaurd 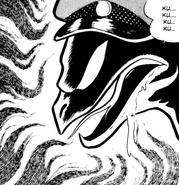 The turtle begins to show 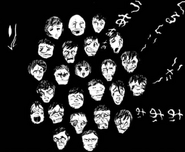 The cruel and evil turtle

Jinmen leaps into the air 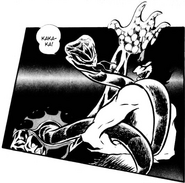 The turtle pops away 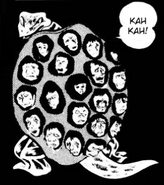 Akira Fudo smashes through the shell 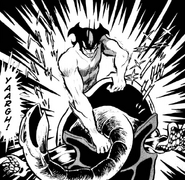 Akira begins to tear Jinmen's shell apart
Add a photo to this gallery
Retrieved from "https://devilman.fandom.com/wiki/Jinmen?oldid=27179"
Community content is available under CC-BY-SA unless otherwise noted.