"Even bloodstained, you are beautiful Sirene."
―Kaim

Kaim is a long time friend of Sirene who he assists in her fight against Akira Fudo. An unusually altruistic demon, Kaim immediately offers his body to merge with his dying love to give her one last shot at victory. His fusion with Sirene lasts just long enough to deal a near-fatal blow to Devilman.

Kaim is a massive demon that resembles a pachyderm. His entire body is covered in armored plates with black detailing across them. He stands on all fours and has a long tail and a pair of massive black horns protruding from each shoulder. His head is comparatively small and is similar to that of a tusk-less rhino. Kaim's blood is white.

In Devilman Lady, he has a more spiked and jagged appearance, with his spikes being more refined. His face is also more ovaloid and human-like.

Kaim had a large amount of physical strength; he was even said to be among the strongest demons, but was weak in comparison to demons like Amon. Even so with his great strength and charging speed he proved a powerful foe, especially when combined with his massive horns. He also held a large amount of strength in his tail. His horns could also release powerful energy bolts. In Devilman Lady, Kaim is shown being able to fly by tucking in his legs and releasing great blasts of fire; however it is probable that he only gained this ability after his long stay in Hell.

Kaim is largely defined by his interactions with Sirene; whenever he is seen, he is either with Sirene or thinking about Sirene, rendering the full nature of his character an enigma. Kaim completely lacks the bloodthirstiness of most of his kind, only fighting when he needs to. He also displays an unusual amount of altruism, willing to sacrifice his life to allow Sirene to merge with his form.

We first seem Kaim during the late Cretaceous era, treading gentlely through the forrest when he comes across the beautiful demoness Sirene bathing in a lake. He watches her before they both notice the demon hero Amon battling another demon high up in the sky.

Later on, after Sirene had been fatally injured in a lengthy battle with Akira Fudo, Kaim was among the lesser demons sent to assist her by Zennon. He met with Sirene at a cliff edge, Sirene shocked by the appearance of Kaim utters his name in disbelief. He tells her that they should merge in order to defeat Akira. Sirene shocked by this tells her that it was suicide and that if she became the dominant one they would eventually die.

Kaim tells her he knows this and that with their combined power they would be able to defeat Devilman with ease. Sirene then asks why Kaim was risking so much for her, he responds by telling her that he had always be in love with her, before killing himself by removing his head. Sirene now in tears runs up to his body screaming his name before merging with the mighty demon.

After a while, Akira finishes off the last of the lesser demons he searches for Sirene before being ambushed by Sirene now fully merged with Kaim. With their combined strength nearly killed Akira sending him into a unconscious state. However before she could strike the final kill she dies from her great wounds in a statuesque stance, with an expression of victory across her face, something that when Akira awakens and remarks as beautiful.

Within the depths of Hell, Sirene is still fused with Kaim fighting Devilman. Akira reprimands Sirene for selfishly using Kaim's sacrifices as a means to an end. This was driven to a point where Sirene defuses with Kaim's body and drops it in a volcano to try and kill Devilman only for it to fail and get told down on the act. Kaim later revives due to the effects of Hell but finds Sirene turned to stone after suffering from much guilt. Kaim stayed by Sirene's side until Dante's activities as the Demon Lord causes demons to surface. During this Kaim pleads with Medusa to bring Sirene back, to which she does with Kaim joining Sirene and the other demons during the resurfacing. Kaim takes the body of Seiji Hayami as he reunites with Sirene in a blackened form after fusing with Aoi Kurosaki.

Kaim's name (カイム) is likely derived from Caim, also spelled Caym, a demon mentioned in multiple Renaissance Christian occult books including: Johann Weyer's Pseudomonarchia Daemonum, The Lesser Key of Solomon, and Collin de Plancy's Dictionnaire Infernal. This demon however has little else in common with Kaim, but Caim's ability to transform into a bird may be reflected in Kaim's relationship with Sirene.

Kaim treads through the jungle in Devilman

Kaim appears before Sirene in a flash of lightening

Kaim urges Sirene to fuse with him 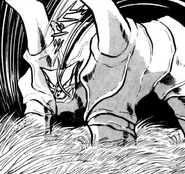 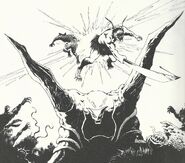 Kaim with Esunotto and Onemammac fighting overhead
Add a photo to this gallery
Retrieved from "https://devilman.fandom.com/wiki/Kaim?oldid=24160"
Community content is available under CC-BY-SA unless otherwise noted.