Good
Kensaku "Tare" Makimura is the younger brother of Miki Makimura and son of Kozo and Akiko Makimura.

Tare was a normal preteen boy. He has dark brown hair that changed in length over the course of the story, and large brown eyes. He frequently wore a backwards cap.

Tare is a kind and innocent boy, but has a somewhat perverted sense of humor, getting a kick out of teasing his older sister about her developing figure (which often gets him hit). He greatly admires his adoptive brother Akira, and later makes friends with Masa. Despite having somthing of a perverse attitude towards his sister, Miki, he still adored her and cared for her deeply. He is a bit of a crybaby and has poor bladder control, hence his nickname Tare, which in Japanese means "drip".

Tare first appears shortly after Akira's transformation into Devilman, seen with his parents commending Akira for his bravery in fighting Dosu-Roku and his gang. Miki then goes on to tell him how Akira beat up a black belt Karate student in a single punch, much to Tare's enjoyment.

Suddenly, a thunderstorm brews, causing Miki to jump in the air. When Tare asks why she was scared, she hits him. Tare cries and Miki instantly regrets what she did. Akira tells Miki that her bath is ready and jokes that all the baths had made her breasts swell up. Tare agrees and excitedly grabs them, but almost immediately feels the wrath of Miki's fist.

Tare is later seen crying on the floor seeing his parents fused into the walls and ceiling by Sirene's minion Agwel. Akira picks Tare up, takes him to his room, then goes on to rescue Miki.

Tare is later seen late one night sitting in a park with his friend Susumu. Tare says he is about to go home, but Susumu claims he cannot go home as his mother and her new pet dog Jiro would beat him. Tare tells Susumu that he could stay at his house where Akira could protect him. Susumu agrees, but on the way home, his mother intercepts them and she takes Susumu home, where she, her dog, and her husband kill and eat him.

After Lord Zennon explains the origins of demonkind to the world and the demons have attacked, Tare is delighted to have read in the papers that the Demon Busters had devised a way to defeat the demon menace. However, not long after this, Ryo Asuka regains his memories as Satan and airs a video tape on live television showing Akira's first transformation into Devilman. Tare runs to his mother in fear. Kozo covers for Akira, but is arrested along with his wife by a squad of Demon Busters. Masa stays behind to protect the remaining Makimuras, and tries to keep them optimistic about Akira and their parents' return, but Tare speculates that the Demon Busters had already killed his mother (which turns out to be correct).

Akira summons all his fellow Devilmen to lead an attack on the Anti-Demon Corps HQ in retaliation. However, as the building is destroyed, a large group of the Makimuras' neighbors gather together, believing Miki and Tare to be demons. Tare is the first to notice the mob while looking out the front window, and immediately after this, someone hurls a rock at that same window, shattering it and hitting Tare. Masa quickly ascertains the mob's intentions, and convinces Miki and Tare to arm up. Tare grabs a baseball bat, but Masa says that he is too small to make use of it, and instead has Tare gather materials to make Molotov cocktails. After he does this, noticing her brother's fear, Miki tells him to go upstairs and lock himself in his room. Tare hears someone break the window upstairs as he goes up, but Miki cockily says to let them come in. This is the last time Tare is seen alive.

Much later, as a defenseless Miki runs for her life to escape the murderous rioters, she hears Tare fall down the stairs, but when she looks, she is horrified to see that it is only his headless body. She then sees a crazed man walking down these same stairs, carrying a bloody knife in his teeth and holding Tare's severed head, tears still running down his face. All hopes dashed, Miki can do nothing but scream in abject despair as she meets her own fate at the hands of her former neighbors.

After their deaths, Tare, Miki, and Masa's bodies are then cut up and placed on stakes that are paraded around by the mob. What remains of Tare is presumably lost in the fire sparked by Akira's rage.

Hikaru Fudo, shares the nickname Tare for his lack of bladder control as a child. His relationship with Miki Hirata also implies that Hikaru might be Tare reincarnated. 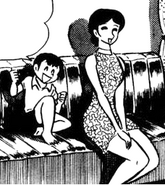 Tare and his mother Akiko in Devilman 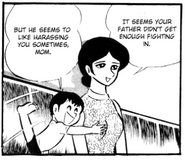 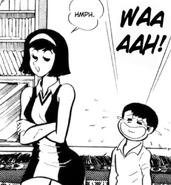 Living up to his nickname... 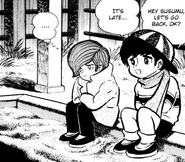 Susumu and Tare sitting in the park 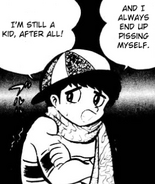 Susumu, Tare and the demon 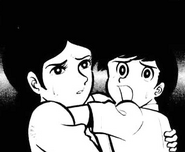 Tare in his mother's arms after learning that Akira is Devilman.

Tare wields a bat to defend himself 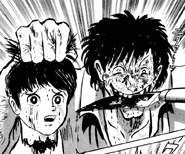 Murdered by the mad
Add a photo to this gallery
Retrieved from "https://devilman.fandom.com/wiki/Kensaku_Makimura?oldid=26673"
Community content is available under CC-BY-SA unless otherwise noted.