Evil
Lyamon(イヤモン/Iyamon) was a young, spiteful and energetic demoness from the eighth episode of the original Devilman anime. She was the younger sister of of the toad-like Bau.

A young demon in her late teens. She had bright yellow skin and pink eyes. She had long scruffy red hair and pointed elf-like ears. She had a detachable tail and wore a skin tight purple outfit that resembled a one-piece swim suit.

Lyamon could hypnotize people and crawl along walls, she could detach and attack with her tail and had a poisoned tounge.

Lyamon deeply cared for her older brother Bau and was deeply loyal to the Demon Tribe. She had a sadistic streak and took pleasure in telling Devilman that Makimura would die.

Lyamon was summoned by her Lord Zennon to try and kill Miki Makimura to get Devilman to surrender and return to the Demon Tribe. In a buzz of delight she awakens her brother to tell him of her proud task, and that she was going off to Kill Miki, after a warning from her brother to be careful she departs.

She eventually finds Miki and traces her for a while, which leads her to Nakado Academy. At the school she disguises herself as a human named Momoko Iwami, and hypnotizes the class before trying to poison Miki, but is interrupted and tries again later, this time having success sending Miki into a fever almost instantly. As  Lyamon tries to make her escape however, she is seen by Devilman who chases her to the roof and causes her to fall of after a short battle.

He strips her near nude and ties her up, suspending her from a beam, he proceeds to whip Lyamon trying to get her to cure Miki but she refuses and calls for her brother to come and rescue her. He quickly arrives to see his sister bound and in pain, enraged he battles with Devilman but after a short fight he is defeated, with his dying breath he frees Iyamon from her bounds, she then goes to her brother and promises to avenge him. Leaping up, she tries to kill Devilman but is easily over powered and set alight, burning her alive. Devilman tries to get the cure from her one last time but Lyamon spitefully tells him there was no cure and dies. This however turned out to be a lie and Miki quickly recovers. 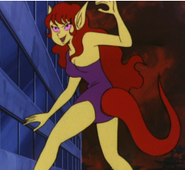 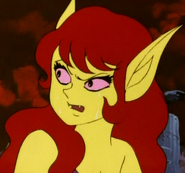 Lyamon and her brother die
Add a photo to this gallery
Retrieved from "https://devilman.fandom.com/wiki/Lyamon?oldid=23452"
Community content is available under CC-BY-SA unless otherwise noted.