Good
Massami Izumi is a supporting character in the 'Devilman' manga, making several short appearances in the final part of the story. Fused with the canine demon Puffurle, Massami served as an aide to Akira Fudo during the final days of the dying world.

Massami was a thin and young woman. She had fair skin, brown eyes and white short hair.

In her Devilman form she had somewhat canine characteristics, growing a thin layer of fur across her body and a pair of lopped ears, her feet turn into dog-like paws.

As Devilman Puffurle, she had a good amount of agility, sharp claws and a toothy maw. She also had some degree of psychic ability, though quite how strong is never specified.

Massami had a caring personality, she worked closely with Akira who seemed to confide in her on frequent occasion.

Massami is first seen amongst a circle of devilmen headed by Akira Fudo in his underground hide out. During which Massami and the other devilmen used their psychic abilities to summon others join them on their cause. Suddenly Dosu-Roku comes running in and informs them of a potential recruit and about the Center of Biological Studies which had been abducting and violently experimenting upon devilman and demon alike. After Dosu-Roku leaves, Massami and the others again attempt to contact others, but are suddenly mocked by a disembodied laughter which reveals itself as several Monks. Appearing before Fudo and the other Devilmen, they promise to use their psychic powers to assit Fudo on his journey.

Later after Ryo had confirmed its betrayal to Akira and revealed itself to be Satan he departs he walks to Massami and he asks her about Satan being as beautiful as an Angel. She tells him about how Satan was an angel who had dared to defy God and was banished from Heaven to earth. She jokes saying that maybe he has seen Satan, he flatly replies saying he had, she turns to ask, but decides against it.

After Akira and the Corps had destroyed the Anti-Demon Corps HQ and he had found the bloodied corpeses of his adoptive parents, he sits and thinks about both humanity and the demons. Massami comes and finds him in the basement, she asks what he was thinking and he replies, he says that he has realized that the humans are no longer worth fighting for as they became even worse than the Demons and that he had no one left to fight for, but he then realizes that he still had one person to fight for, Miki. He rushes home only to see a horrific sight.

Izumi concentrating on her psychic abilities 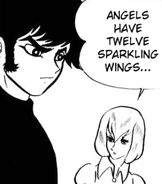 Massami explains her knowledge of the Angel Satan

Devilman Puffurle converses with Akira Fudo
Add a photo to this gallery
Retrieved from "https://devilman.fandom.com/wiki/Massami_Izumi?oldid=26681"
Community content is available under CC-BY-SA unless otherwise noted.