Mazinger Angels vs Devilman was a three chapter story arc in the Mazinger Angels manga, notable for being a partial remake of the animated crossover film, featuring many characters and elements from it and the overall Devilman mythos.

The story begins with Dr. Hell sending a specialist mining Mechanical Beast named Mantes K9 deep into the Himalayas to excavate the ice and awaken the Demon Tribe, the plan is successful and the two sides join forces, hoping to defeat both the Angels teams and Devilman.

The scene switches to lazy school thug Naojiro Abashiri lusting over Sayaka Yumi, Chachiko Nurakami and Miki Makimura. Miki gets annoyed and goes to confront Naojiro but he just flirts with her, however Devilman in the guise of Akira Fudo comes over and beats Naojiro up for his attitude. This only annoys Miki however and she slaps him.

Later at the Makimura home she apologises and leaves to her room, only to be kidnapped by the demoness Lyamon. we then see the demon Bugo fly over the centre of Tokyo and the Mazinger Angels are called out, they attack Bugo, and the demon flies away. Akira arrives to see Bugo the fleeing demon and transforms, only to see the Angels mechas, thinking them members of the Demon Tribe, he attacks them with his devil cutter. Maria Fleed, the pilot of Minerva X flies into the air, but her wings are clipped by Devilman and she falls to the ground. Fleed's allies try and  help but Devilman knocks them away with relative ease and leaves.

the second chapter begins with Devilman sitting atop Tokyo Tower thinking about Miki's kidnapping, seeing her kidnapped by Lyamon as Bau and teleports them away. Akira screams and punches wall, the scene swaps to the Angels HQ with the Angels watching some video footage of the Navalon, the private air fortress of Dr. Hell. Jun and Maria are sent to investigate the Navalon after they discover the disappearance of over  young women. They get aboard and defeat a group of robots before going further inside, it is then revealed that Devilman was also aboard. Back at HQ, the Great Booster is revealed to Sayaka.

Jun and Maria then find Dr. Hell however they are then surrounded by demons, they step back and are grabbed by the demon Mugaruu's tentacles. The demon leader Zannin reveals himself to them and notices Devilman hiding in the shadows. Aphrodite A and Minerva X approach the Navalon, as a Mechanical Beast named Grogos G5 is sent out and it revealed that all twenty of the missing hostages were attached to the beast in capsules. Among them was Miki, Jun and Maria. All trapped in the head of the Beast.

Dr. Hell then reveals that it was impossible for them to hurt Grogos, as any attack on the Beast would result in the death of a hostage, Devilman is then show crucified to a cross atop the Navalon. Zannin tells them they intended to kill Devilman. Grogos G5 attacks the two and the Angels try to avoid its lunges, Zannin then turns to Devilman and starts to smash into him with his whip like tail. Grogos fires Miki's capsule out from its forehead however its caught by Aphrodite A, however in the distraction Minerva X is stabbed by Grogos claw. Grogos then fires off the other hostages in a fast flurry, intermixed with its missiles. Aphrodite A grabs the hostages and Minerva X takes the missiles, serving as a shield. After all the hostages are saved Devilman escapes, before flying into the Grogos G5 and causes it to explode from the inside.

Dr. Hell attempts to flee on the Navalon but is chased by The Great Booster, He sends Bugo and the Mechanical Beast Haribyun Y6 to stop it but they are easily killed and the booster impacts with the Navalon, destroying the ship in a grand explosion and killing any surviving demons. Afterwards Devilman walks home with Miki as the other hostages are freed from their capsules, ending with Sayaka Yumi pondering on who Devilman really was. 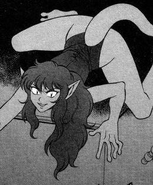 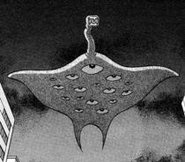 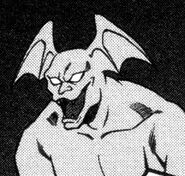 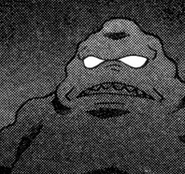 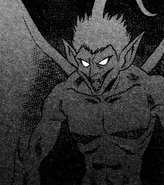 Kensaku Makimura
Add a photo to this gallery
Retrieved from "https://devilman.fandom.com/wiki/Mazinger_Angels_vs_Devilman?oldid=23733"
Community content is available under CC-BY-SA unless otherwise noted.