Evil
Medoc was a parasite demon that served as a antagonist in the 'Devilman' manga. He fused with the president of the USSR in Russia, he attempted to launch nuclear missiles across the world but was stopped by otherworldly forces.

Medoc was a parasite-like demon. When merged with a human, he had a pair of small white eyes above a set of larger red compound eyes, tendrils hanging down from his face and green skin.

Whilst not showing off any powers Medoc is apparently one of the most intelligent and smartest demons as he self proclaimed at a few points, having target and successfully hijacking the body of a powerful politician.

Medoc showed great loyalty to the demon race and was incredibly arrogant. He did show fear towards his leader Zennon however.

After Zennon had announced the forthcoming demon invasion across the world, it took only five minuets for a swarm of devils to begin descending down upon the cities of the world, killing and destroying all they could. Medoc took over the body of Russian President. His assistant being taken over by the hyper-intelligent twin headed demon Masstuff.

When a US battleship, Admiral, fires several nuclear missiles at Moscow thanks to demon manipulation, the American President quickly phones the Russian presidents office to warn Russia, so they can try and destroy the missiles before impact.

On the other end of the line however, Medoc reveals themselves and mocks him, before telling the President that they'll allow the missiles to hit, then fire their own across the world in faux-retaliation. He then slams down the receiver and laughs with Masstuff.

As the missile flies above Tokyo however, it simply vanishes into thin air, much to everyone's surprise, be they human or demon. Medoc falls into panic, with Masstuff confirming that whatever happened couldn't be humans doing. he begins to fear the possibility of having to tell Zennon, lamenting the demons who passed away when infiltrating Russian hierarchy.

asks his aide Masstuff what was happening however the demon says he didn't know claiming that not one of his two heads had any knowledge on this. Suddenly the floor begins to glow intensely, looking around the two demons notice the entire room aglow. Medoc throws open a window and is horrified to see the entirety of Moscow engulfed in the shimmering luminescence. Masstuff is absorbed and killed by the light, Medoc was terrified to see his body begin to deteriorate, and by extension the entirety of Russia. The light envelops his body, rapidly burning away, severing his head, before indeed, eating that away too.

Medoc and Masstuff, in Devilman 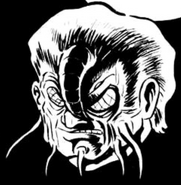 Medoc in the shadows 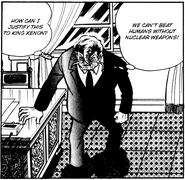 Medoc is engulfed by the light

Medoc's head burns away
Add a photo to this gallery
Retrieved from "https://devilman.fandom.com/wiki/Medoc?oldid=25827"
Community content is available under CC-BY-SA unless otherwise noted.