Can emit acids from breasts and crotch

deceased
Mikiko Kawamoto (nicknamed Mico) was a supporting character in the original Devilman manga. A young girl of faith that becomes forcefully fused with the demon Tollg. Unlike other Devilmen, Mico was unable to revert from a human to demon guise, and was instead cursed with Tollg's visage across her body at all times.

Mico was a girl in her late teens with short black hair. She was only shown wearing a single outfit with a jacket, checker hat, a scarf and wide-legged pants with a flower pattern. The demon she had fused with distorted her body covering it in a coral like substance with the demon's head sticking out at her crotch, and unlike most other Devilmen she could not change between human and demon form.

Mico was a kind and trusting girl who constantly had her trust betrayed. She is apparently of Christian faith, which is shown by her prayers. Before her transformation, she was friends with a small group of thuggish girls called the Ostrich Gang, although it seemed they only pretended to like her. Mico however, was distraught when she accidentally killed them. Due to all of time spent in the Demon Busters' facilities, Mico felt tortured and convinced that she was a monster. It was only after meeting Akira that Mico had found solace while beginning to accept her new position as a Devilman among a group of friends.

Before her transformation, Mico was apparently a thief who could steal without being detected. Mico could use the demon she had fused with to emit powerful acids from her crotch and breasts.

Mico is first introduced as she walks to her home through the back alleys, only to run into her old friends, the Ostrich Gang. They begin to ask why she had been avoiding them, as they say how they needed her thieving skills again she denies their offer and runs off.

At home in the bath she begins to pray, confessing her sins and that it was her "friends" which forced her to do all the bad things. Before her full body is revealed, fused and horribly scarred by the demon Tollg.

The next day she tiredly walks to school, however she is stopped on the way by two of the gang members. The third member had been arrested the previous night. They angrily shout at Mico, however it is not helped when she bluntly insults them and ignores them. They two grab Mico and push her up against a wall and in attempt to humiliate her they try to strip her nude of her clothing. However they are horrified to see what lay underneath. Mico enraged releases her acids, spraying the two girls which slowly burns away and melts their flesh.

A long while after the attacks, across the world by the demon hoards, it is established that Mico was taken to be tested upon in the Center of Biological Studies and is experimented on by Dr. Rainuma, who has his scientists painfully restrain Mico and deliver repeated electrical shocks to her body to gather samples of Tollg's acid. Eventually, this acid was mass-produced for the weaponry utilised by the Demon Busters.

After many long days of torture Mico loses herself a little and begins to believe the hateful things Rainuma said she was. Not long after Akira Fudo who had infiltrated the building to find more Devilmen, finds only Mico trapped inside a large glass cage. She looks up and sees Akira as he smashes the glass, she tells him that she was also a demon thinking Akira one as well, but he tells her that she was the furthest thing from a demon and was instead a Devilman. Akira picks her up and holds her in his arms where she immediately falls asleep.

Mico cries for her sins

Mico's malformed body is revealed, fused with the demon Tollg 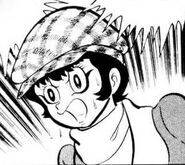 Mico stands up to her bullies

Reeling in shock at her actions

Mico is experimented on

Mico in the tube 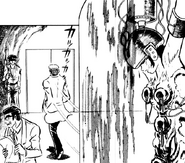 Mico in the chamber 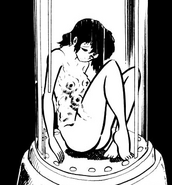