Start a Wiki
Mitsuru Hiruta is a Japanese Mangaka born in 1943. He created his own Devilman adaptation which was released to promote the anime series that ran from 1972-73.

Hiruta began in manga at a young age working primarily as an assitant before joining Dynamic Pro under the leadership of Go Nagai. There he adapted his own versions of several Dynamic Pro series including Mazinger Z, Getter Robo and of course Devilman.

His origonal work included the super hero titles such as 'Silver Mask' and 'Mirrorman', and co-created the baseball series 'Hakkyu Suikoden hoero ryu'. He also did adaptions on other works such as 'Brave Raideen', Ultraman Ace', 'Kikaider' and even some Godzilla movies. 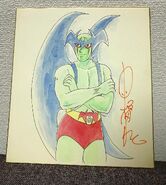 Add a photo to this gallery
Retrieved from "https://devilman.fandom.com/wiki/Mitsuru_Hiruta?oldid=21040"
Community content is available under CC-BY-SA unless otherwise noted.