Evil
Muzan was the second of Zennon's three mighty Demon Generals. He spent most of his time watching events rather than getting involved. However when he fought, he proves to be deadly threat.

Muzan was a towering bipedal demon with slight feline features. He had pink fur and several tails spread across the lower part of his body. He had a spiked white mane and drooped yellow coloured eyes. He had a pair of long blue antenna. On his chest was a large mouth lined with teeth and a large pink furred crest was lined above it.

Muzan was able to create pocket dimensions with ease and teleport entire areas into them. He could fly by transforming into smoke and was also able to teleport. Muzan could transform his body into various objects including a hydra and had large amounts of strength allowing Muzan to tear of limbs.

Muzan was a more militaristic leader than the other generals, and would punish those who failed him, or failed to follow orders. He was even happy to exploit and kill his own soldiers to hurt his foe as shown in the case of Dorango. However he was still incredibly loyal to the Demon Tribe and Zennon, willing to kill himself just so he had a chance at defeating Devilman.

After the death of the first general Zannin, Muzan was sent to replace him. However its not until the centaur demoness Ebain comes running to him that he finally shows himself and creates a magical key for her able to create a new dimension.

After her death he continues to send demons to cause anarchy and chaos including Dagon, Psycho Jenny and Adal. However his soldiers are continuously killed by Devilman. In a plan to crush Devilman or kill him, Muzan commands the ice demon Dorango to defeat Devilman.

Dorango goes but is unable to kill Devilman, as before his betrayal he and Dorango were best friends, and even makes friends with some of the humans during his short time on Earth. When Muzan hears of this, he beats Dorango and forces him to fight to the death. After Dorango was sadly slain by his friend, Devilman swears vengeance against Muzan.

Muzan continues his plans, sending out the demon Draw to kill and destroy as much as possible, Bela to expand the Demon Tribes territory, Mugaruu to kill Devilman, and Jacon to cause chaos and kill Devilman's friends. However after seeing some of his best troops slain, Muzan tires of these setbacks and goes down to the human world himself to do a final battle with Devilman.

Muzan creates a dimension around the school Devilman attends, entrapping several of Devilman friends and teachers, before calling Devilman forth. Muzan tells him after a brief fight that if Devilman were to kill him, those trapped would never return. However, Devilman tricks Muzan into allowing him into the dimension and the two have a final stand of on the grounds of the school. Muzan instantly gains the upper hand tearing off one of Devilman's wings. Devilman however realises that if he were to kill Muzan inside the dimension, things would return to normal so he sneaks up on Muzan and uses the Devil Arrow. Muzan attempts to stumble after Devilman for a last strike but falls to the ground and explodes into a liquid form. Afterwards the school returned to its normal state. Muzan is later succeeded by the Devil Marshall Lacock. 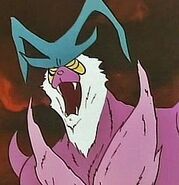 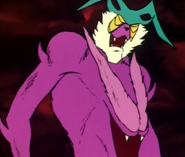 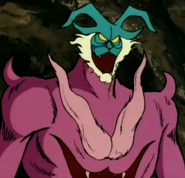 Muzan disguised as a hydra like demon
Add a photo to this gallery
Retrieved from "https://devilman.fandom.com/wiki/Muzan?oldid=22029"
Community content is available under CC-BY-SA unless otherwise noted.