Good
Professor Asuka was a famous archaeologist and the father of Ryo Asuka. He supposedly committed suicide before the beginning of the manga, and so was only seen in flashbacks and a photo with his late wife. It was the professor's notes that opened Ryo's eyes to the truth of the demons and their plan to destroy humanity. The Professor's given name is never revealed within the manga.

The professor was a middle-aged Japanese man with black hair, dark eyes, and a beard. He wore glasses to help his poor eyesight. According to Ryo, the professor was a skinny man who couldn't have weighed more than 120 kilos (around 264.5 pounds)

He is shown to have cared greatly for his son — so much so that he was willing to kill himself before he could harm him. Although Akira Fudo thought that because the professor was a scholar that the professor would be a stick in the mud, Akira later discovered that the professor was the exact opposite of such an image. Professor Asuka was apparently a friendly person before his death and only appeared to change after being possessed by a demon.

At some point in Ryo Asuka's childhood, Ryo's mother—the Professor's wife—died of unspecified causes. This leaves the professor (as Ryo himself puts it) as Ryo's "only family".

About a month or so prior to the beginning of "Devilman", Ryo Asuka's friend Akira supposedly visits the Asuka household and socializes with both the professor and Ryo. According to Akira, the professor looked healthy.

Professor Asuka was leading an expedition that was researching ruins in Peru when he stumbled down a deep unseen hole, where he discovered the Demon Mask. He brought it back with him to Japan and spent several months investigating it before finally trying it on; this turns out to be a foolish thing to do as he is possessed by a demon. The demon causes a sharp change in the professor's personality, giving him strong desires to kill, starting with his pet canary and his dog John. When confronted about it by his son, he simply laughs it off and wipes his bloody hands.

Later that night, he tries to kill Ryo in his sleep only for Ryo to wake up, causing the Professor to temporarily regain his human senses and flees. Full of guilt and fear over what he was becoming, he then douses himself in gasoline and sets himself on fire, just as Ryo comes running through to witness his father's death. When Ryo tries to bury his father, he realizes that despite not changing in size his father's weight had doubled, proving that he had been possessed by a demon. Ryo later reads through his father's notes, and after reading through both the notes and his father's diary does Ryo realize the truth about the demons.

After Ryo breaks up a fight between Dosu Roku's Gang and Miki Makimura using a sawed-off hunting rifle, Ryo asks Akira to come to his house as Ryo suspects that his life is in danger. Although neither Ryo nor Akira are of legal Japanese driving age—that is, 18 years old—Ryo makes a mention that he'd modified his father's driving license (the yellow car that Ryo drives in is presumed, but not explicitly stated, to belong to the professor).

In the final arc of the manga, Ryo falsely claims that his demon-possessed father had actually been the one to orchestrate the Black Sabbath event, forcing him to invite Akira and some other friends as bodies for his demon companions to take over. After the reveal that the professor had never done any research on demons and that the person thought to be Ryo Asuka is actually Satan, it is clear that even Ryo's original recollection of events was false. What really happened to Professor Asuka remains unknown, but he was likely killed by demons around the time Satan assumed his son's identity. 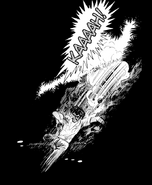 The Professor moments before discovering the Demon Mask 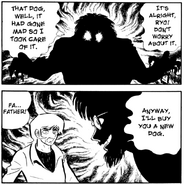 A demon talks through the professor
Add a photo to this gallery
Retrieved from "https://devilman.fandom.com/wiki/Professor_Asuka?oldid=23889"
Community content is available under CC-BY-SA unless otherwise noted.