Start a Wiki
watch 01:44
Who is Psycho Jenny?
Do you like this video?

Neutral
Psycho Jenny is one of the leading figures in Satan's demon army alongside Zennon. She has displayed incomparable psychic abilities, including manipulation of time and implanting fake memories into others. She is a antagonist in the Devilman manga, and has gone on to appear in many spin-offs and sequels.

Psycho Jenny generally resembles a deformed human female with an abnormally large head. Psycho Jenny's most recognizable appearance has her head in place of her upper torso. Her eyes are large with hypnotic multicolored irises, and she has long untamed hair.

In her first appearances, she possesses a normal lower torso with a headless neck sometimes protruding from her scalp but later is drawn as if her legs grow directly from under her head. She is human-sized in Devilman, but is several meters tall in Devilman Lady.

Despite all the differences, Psycho Jenny's haunting, ever-present smile is consistent across all depictions of the character.

Psycho Jenny carries an air of mystery. She very rarely speaks unless spoken to (and even then only telepathically), often just staring blankly. Unlike most demons, she doesn't appear to have any emotional investment in either the destruction of humanity or the war against God, and is only loyal to her master Satan. Although she seems to find Satan's love for Akira Fudo slightly foolish.

Psycho Jenny is among the most powerful and intelligent of the demons. The true scope of her power is impossible to gauge, but she has demonstrated the following abilities among others: hypnosis in order to put people in trances and even implant fabricated memories, mind control to take command of a being, telekinesis powerful enough to create energy blasts, telepathy which she uses to speak, and shape-shifting that varies depending on her appearances. She also is able to hide all traces of her existence from God's angels and jump in and out of reality with great ease.

At an unknown point before the beginning of the manga, Psycho Jenny wipes her master's memories, and replaces them with those of a recently deceased boy named Ryo Asuka in order for Satan to discover the key to destroying humanity so that demonkind can rule the earth once again. She then manipulates the minds of Ryo's father and friends to recognize him as the boy. Afterwards, Psycho Jenny creates a bizarre object named the Demon Mask which she leaves for Professor Asuka to deliberately find and bring back to his home where he learns about demons, along with his "son".

While the demons are devastating Tokyo, Akira Fudo goes out of hiding against Ryo's wishes to slaughter as many as he can. After having killed many, he is stopped in his tracks by a pair of flashing eyes — Psycho Jenny's — which cause Akira to suffer a meltdown and completely lose consciousness. Psycho Jenny gloats that no matter how strong Devilman may be, he is no match for her psychic powers. She and her subordinates are prevented from killing him per Satan's orders, and Akira is instead sent back to Ryo's apartment.

Later, in the midst of Ryo's identity crisis, Psycho Jenny steps out from among the other demons that have invaded his home, announcing that they have all come to meet him. She then uses her hypnotic eyes to restore Ryo's true memories.

Psycho Jenny is briefly seen near the conclusion of the series, where she restores both Jun Fudo and Lan Asuka's memories as Satan and helps fuse them back together; she later helps in the final battle against God. 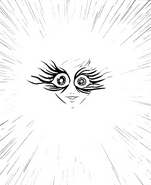 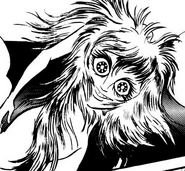 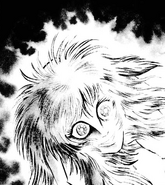 Jenny in the dark 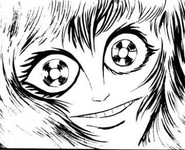 Up close and grim 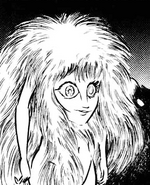 From the Neo Devilman story Dammed
Add a photo to this gallery
Retrieved from "https://devilman.fandom.com/wiki/Psycho_Jenny?oldid=26425"
Community content is available under CC-BY-SA unless otherwise noted.