Evil
Rasber is a demon made of organic-web, who appeared in the Devilman manga. Initially appearing as a unknown entity that many believed to be Demon General Zann, Rasber was named and given a expanded role in the deluxe edition of Devilman later on.

Rasber had no specific form, it's body being made of tangible white web allowed it to constantly transform. Initially seen as a swarm of large spiders, with the main body having a massive spider sat above a perfect replica of Akira Fudo. A second form resembled a colossal web-like octopus with a face reminiscent of Demon General Zann's chest. Another form resembled a small stocky humanoid with large eyes and sharp teeth.

Rasber could create various physical bodies for himself in any form,and control them in a seemingly unlimited number from a single main source. It could posses humans with it's spiders, entangle prey in its acidic web-body and fly in the air.

While not really giving much of a discernible character in spite of his relatively large appearance, one could pull out several cowardly personality traits giving his use of possessing humans to fight for him and fleeing into the air when danger got to close.

After Akira Fudo had beaten down Masa and his gang, (consisting of Dosu-Roku, Manjiro, Meriken-Jo and Tetsuya) in a very brief fight atop the school, they are confronted by a strange looking girl who asks if they want a chance to beat Akira in a fight, then without waiting for a answer, she suddenly explodes into a swarm of spiders, tearing her body apart like paper. The spiders then possess the gang.

Under Rasber's control, they hunt down Akira, finding him in a classroom talking to Miki Makimura. They battle again, Akira realising they were under a demons control takes care not to hurt them badly, and carefully picks off the spiders attached atop their head. After dealing with them, they pledge their allegiance to Akira and join him in his quest against the demons.

As the group leaves in good spirits, they suddenly find themselves surrounded by the school's various sports teams, all under Rasber's control. Akira tells the gang to protect Miki as he goes off to search for the spider's mastermind. He finds Rasber in a disguise replicating Akira, with a massive spider atop his head. Akira took a swing but the faux-copy suddenly disappears. Then, all the possessed humans suddenly stand still as the spiders controlling them detach themselves and fly off into the sky, slowly merging together into a colossal web-beast that glares down at them and mockingly laughs.

Rasber proceeds to spread their web over the school area, enfolding Miki and Masa's gang. Rasber reveals that he plans to use the acidic properties of his web to dissolve and then consume them, before doing the same to Devilman. Akira destroys the spider he believes to be Rasber, only to discover that it was a decoy and the true Rasber is the webs themselves. Rasber enfolds Devilman and proceeds to try to live up to his earlier threats, but Akira proves too strong for him and he is ripped apart. 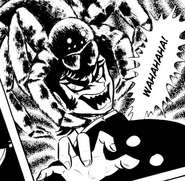 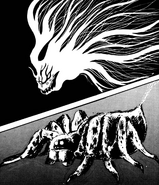 Rasber's horror
Add a photo to this gallery
Retrieved from "https://devilman.fandom.com/wiki/Rasber?oldid=26457"
Community content is available under CC-BY-SA unless otherwise noted.