Rokurou Ozu is an important character from Devilman: Strange Days. He is a friend and fellow The Flyers band-member of Kira Udoa and Ryuu Kasuka. He usually goes by the nickname Ozuroku.

Ozuroku was a tall thin boy, his black hair is cut short except for a small pony-tail in the back of his head and he wears a pair of round, plain glasses.

OzuRoku was childhood freinds with Makippe Mikimura and had a romantic relationship with Saki Mikimura best freinds with both Kira and Ryuu. He was very level headed, even when held at gunpoint or being attacked by a demon, he generaly wanted everyone to be happy. He was somewhat of a music geek as well, with a keen intrest in forigen bands such as the Beatles.

He formed the rock-band The Flyers together with his classmates Ryuu Kasuka and Kira Udoa. He has a romantic relationship with devilman Saki Mikimura. When she is attacked by the Demon Special Investigation Corps he dies trying to defend her. Saki is also killed in her attempt to avenge him.

Ozuroku was based on the character Dosu-Roku, a supporting character in the original Devilman and a major character in Kinutani's previous manga Amon: The Darkside of the Devilman. There are several links between the two the main one being the names Rokurou Ozu/Ozuroku and Dosu-Roku, the other being that other than Miki Mkimura, Dosu-Roku could be considered the next main human element (Certainly having more to do than various other characters) this is played in Strange Days with Ozuroku being the only member of the Flyers not to be a Devilman. Another connection is in a throwaway line by Kira who mentions how a demon had previously attacked Ozuroku whilst fighting Jinmen, in the original Dosu-Roku is attacked by Zann shortly before Akira Fudo fights Jinmen. 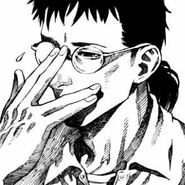 Add a photo to this gallery
Retrieved from "https://devilman.fandom.com/wiki/Rokurou_Ozu?oldid=13550"
Community content is available under CC-BY-SA unless otherwise noted.