Edit
watch 01:41
Who is Sirene?
Do you like this video?
Play Sound

Sirene (シレーヌ, Shirēnu?), sometimes Romanized as Silene, was a bird demon best known for her pride, beauty, and bloodlust. She was determined to kill Akira Fudo, and she was the first demon who posed a significant threat to Akira after his transformation into Devilman. She came closer to defeating Devilman than any other demon he had fought at that point; only her own death robbed her of victory.

Sirene is often described as one of the most beautiful demons, to the point where she has been mistaken for an Angel more than once. Like the Sirens of Greek mythology, Sirene looks like a hybrid between a human and a bird: She has the general appearance of a beautiful young woman with blue eyes, light skin, slender physique and a pair of voluptuous breasts. Along with these human traits she has a feathered tail, two antennae on her forehead, bird claws as arms and legs and a large pair of white wings sprouting from her head which allow her to fly. Bird-like plumage grows around her face and over her crotch. Depending on the artwork, her plumage excluding her wings are either white or pink.

In addition to flight, Sirene has the ability to launch her razor-sharp claws at her opponents; she has a degree of control over them even when they're not attached to her body, and she's able to call them back to her like boomerangs. Like the majority of demons, Sirene is more physically powerful than any human, allowing her to lift and carry a regular sized human in her talons. She can teleport short distances to escape dangerous situations. She also has a human disguise as many demons do, but rarely uses it. Sirene is also shown to have telekinetic abilities. 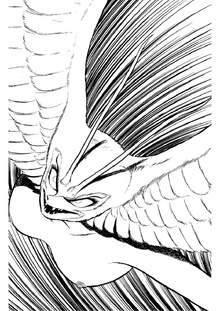 Sirene was deeply in love with the mighty demon Amon, whom she had known nearly her entire life. She was also very close with her friend Kaim despite not returning his feelings. While Sirene, like many demons, does not have a good outlook on humans, the only ones she actually does anything against are Akira and his loved ones. When Akira takes Amon from her after the Black Sabbath, her desire for vengeance drives her to want to destroy him and everyone he cares for. She goes so far as to kill one of the forms of Damudo while it hunts down Akira just so she can have the pleasure of killing him herself.

Her hatred for Akira lives on even after her death, as she is compelled to attack Devilman as they're both trapped in Hell. However, after her ally Kaim has sacrificed himself a second time to aid her fight, and after Devilman points this out to her, she realizes the selfishness of her actions and comes to accept Kaim's love and friendship.

When she is back on Earth (having fused with the recently deceased Aoi Kurosaki), Sirene has the chance to kill an unconscious Jun Fudo, whom Akira loves. However, she simply flies away with Kaim, showing she is truly over her feelings of grief and bitterness from losing Amon.

Sirene first appears very briefly, standing among a large group of demons, as Akira gets a glimpse into the demonic world through the mysterious Demon Mask.

She is not properly introduced, however, until the next arc. Two days after Akira had combined with the mighty demon Amon, Sirene finds out where he lives and comes flying down to the Makimura Residence. She proudly announces her plans to kill Akira Fudo, and conjures a storm around the house. With the storm arrive two of her subordinates, summoned to torture the Makimura family: Ghelmer, a demon who controls water, and Agwel, a demon with the ability to make people and objects tangible and intangible at will.

As her minions go inside to complete their mission, Sirene begins to have doubts about whether or not she is capable of defeating Devilman, but she sets these feelings aside, gleefully remembering all the prey she had ripped apart with her claws in the time before humans walked the earth. She boasts that anyone who dared to challenge her in the past ended up sinking in a sea of their own blood. She confidently chants that she is strong and that she will defeat Devilman.

After Akira defeats both Agwel and Ghelmer, he lets down his guard and turns back to his human form. This allows Sirene to come crashing through the roof, snare Akira in one of her talons, and carry him off into the sky. Akira tries to transform into Devilman, but is unable to — Sirene laughs and explains that the electrical energy flowing through her claws nullifies his powers. Seeing no way out, Akira demands a quick death. However, Sirene replies that a human like him only deserves to die like a lowly bug. She gloats that she will be carrying him off to Lord Zennon's domain, where 100 of his subordinates will rip Akira into pieces one by one.

Unbeknownst to her, Akira's friend Ryo Asuka is standing on a cliff edge near a forest, watching and waiting for Sirene to cross paths with him. He successfully shoots her through the chest several times, causing her to drop Akira. In response, Sirene fires off one of her claws at Ryo, knocking him out and pinning him down. She and Akira (now fully transformed) then have a battle in the sky; Akira promises to show her what "bugs" like him are capable of, while Sirene swears to rip him to 100 pieces herself. Devilman soon gains the upper hand and propels Sirene down to the forest below.

Akira follows Sirene, but is bombarded by several trees that Sirene hurls at him using telekinesis. Akira quickly gets past the obstacle and begins to viciously beat Sirene until she starts to throw up blood. While is happening however, the claw that had pinned down Ryo rises into the air and begins to return to its owner like a boomerang. Akira continues beating down on Sirene when her detached claw partially severs one of his arms, giving Sirene the opportunity to rip this same arm completely off. Sirene attacks him with the spinning claw several times, managing to slash him across the stomach. Akira soon realizes that Sirene is controlling her other claw with her antennae. While Sirene is gloating, he grabs Sirene's antennae with his own, causing her to lose control over the trajectory of her claw. Sirene's claw began to spin around randomly until it reached its owner and spears her through the chest. She stands in shock before vomiting a pool of blood. As she attempts to flee, but Akira grabs her right wing and rips her head off, this causing her agonizing pain.

She tries to run from her attacker, screaming in pain, and begs for Zennon to send her reinforcements to help her defeat Akira. With a flash of lightning, Zennon answers her please by sending down a large number of demons to battle Akira. Among them is Sirene's old friend Kaim. He tells her to fuse with him, but Sirene, not wanting to risk his life, told him that if they were to fuse it would kill him. Kaim told her he does not care about his own survival, and that his only want is for Sirene to taste victory after defeating Devilman. Confused and shocked, she asks why. His only response to Sirene is that, even in her current state, she is still beautiful. He then kills himself to ensure that Sirene's consciousness would take control. Sirene, in tears that he had given his life for her, runs to Kaim's body and fuses with it.

After Akira has dealt with the rest of the reinforcements, Sirene, fused with Kaim's torso, comes racing at him, trumpeting that she will give Devilman's life to Kaim. She unleashes electrical bolts which stun him, and then impales Akira through the chests with her (formerly Kaim's) horns. Akira attempts to fly, but is unable to move and falls to the ground. Sure of his impending death, Akira wonders why Sirene doesn't come back to deliver the final blow and claim victory over him. The last thing he sees before passing out is Sirene's silhouette.

To his surprise, Akira wakes up to see Ryo, who had bandaged up his wounds and reattached his arm. Akira searches for Sirene, wondering why she did not finish him off. Ryo points to Sirene standing on a hill, dead. He also points out the look of victory and happiness expressed across Sirene's face, apparently fully confident that that she had won in her battle against Devilman. Still gazing at Sirene's statuesque form, Akira says that even such a brutal, frightening creature is beautiful in his own eyes.

In Devilman Lady, she returns in Hell, still fused with Kaim and attempts to again kill Akira. However after being ridiculed by Devilman for taking advantage of Kaim after defusing from his body and sacrificing it into a volcano, she regrets throwing away his love and asks Medusa to turn her into stone. However after the dead are released from Hell, Medusa revives Sirene. She merges with the dead body of Aoi Kurosaki and rejoins with Kaim before joining Satan's new demon army.

Sirene is based on the Siren (Σειρήν) of Greek mythology, with the spelling of her name (シレーヌ) deriving from the French derivative. Like Sirene, the sirens were ferocious bird-like women of exceptional beauty. Tales of them survived into the Christian era, sometimes as metaphors, other times to be taken literally. The sirens are even referenced in Saint Jerome's translation of the Bible, the Vulgate, which would become the official Latin Bible of the Roman Catholic Church. 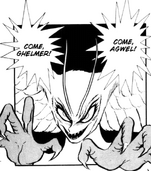 Sirene in the night 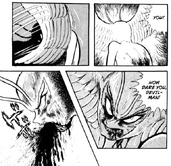 Sirene starts to feel her wounds

Sirene's body in the sunrise