One Hand is Enough

Tako is a supporting character in Devilman Crybaby. He is the pet cat of Makimura family, who later transforms into "devilcat" and becomes Akira Fudo's aide.

Tako is a usual black cat with green eyes. In his Devilcat form, his eyes and ears grow larger, and his neck elongates. He also grows two bat-like wings, and a glowing orb on the end of his tail.

Tako can fly, as well as use his light bulb looking tail to create a powerful flash of light, that stuns (or kills, it's unconfirmed) everyone around him. It also worth to note that Tako got an ability to talk.

Tako is mostly seen cleaning his plate, devouring his food or walking around Makimuras' house. It seems like, as an animal, Tako also sensed Akira's devil nature.

Tako is killed by witch hunters during their assault Makimuras' house but he later resurrects and transforms into "devilcat", stunning (or killing) hunters around him with his flash tail. After that, he is gathering other devilmen for Akira. During the final battle against Satan, he attempts to attack the angel directly but getting killed again, this time by Satan's telepathic slash. 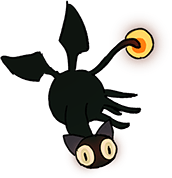 Laying on Miki with Taro nearby
Add a photo to this gallery
Retrieved from "https://devilman.fandom.com/wiki/Tako?oldid=26762"
Community content is available under CC-BY-SA unless otherwise noted.