Evil
Texsch was a female-squid like demon who served as a deadly pursuer in the original Devilman manga, and led a ambush to try and ensnare the human teens Akira Fudo and Ryo Asuka.

Texsch was a large octopus-like demon and had two long and powerful tentacles in place her arms, five tentacles along her head, and two large tentacles on her breasts. Her head has a pair of blank eyes that are probably used to mislead as the eye she uses to see is on her crotch area. A strong black mark is seen on her forehead between her eyes, which is a small trait that has been seen in most reappearances of the character since.

Texsch had strong skin that was durable enough to resist bullet fire. Her tentacles along with her great strength allowed her to pick up objects as large and heavy as a car. The tentacles however can be cut off with a knife.

Having concluded their grim business for the day Akira Fudo and Ryo Asuka drive off, with the intent of dropping Akira off at his home.

As they drive along the dim-lit cliff edge however are driving back from Ryo's home in his car, a robed young woman steps out in front of them, surprising the two. Throwing away her body covering robe, she reveals herself to be the harpy demoness Illuge. Letting out a powerful scream that cracks the car window's, it served as a signal of attack and suddenly four more demons came into the fray, Hatchtus, Carad, Virava and of course Texsch.

She and Carad manage to latch onto the car, however as the frog demon stumbles off as the car speeds away, Texsch manages to use her grip to stay on. Akira reluctantly tries to kill her by shooting her in the head. Before he can however, a tentacles veers inside and loops itself round Akira's neck. Ryo cuts off the tentacle with a hunting knife, then takes the gun and shoots her in the head himself. Texsch starts to laugh as her grip releases and she falls from the car, just as the car arrives back at the Asuka Residence.

She quickly gets back up and chases them back into Ryo's home. Texsch smashes through the window and hunts them down through the house but loses them when Ryo and Akira go into the Black Sabbath party Ryo had hidden in the house.

Texsch jumps down in Devilman 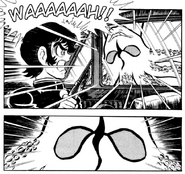 Laughing off a headshot

Texsch flies off from the car

Texsch leers through the window

Texsch smashes through the window

Pursuing the two through the halls of Ryo Asuka's home
Add a photo to this gallery
Retrieved from "https://devilman.fandom.com/wiki/Texsch?oldid=24430"
Community content is available under CC-BY-SA unless otherwise noted.