Toshin Devilman (闘神デビルマン, Toshin Devilman Saint Fighter)is a manga remake of the Devilman anime while retaining elements from the Devilman manga by Yoshihiro Iwamoto in Comic Bonbon in 1998. It stars a new protagonist named Kei Kamishiro, a yo-yoer who fused together with Amon to become Devilman.

The ruler of the demon world Zenon gives the order to kill the humans. One of the four heavenly demons Amon however did not view humanity to be as weak as the others believed. This caused unease within the rest of the ranks and Amon escaped them before encountering a junior high student named Kei Kamishiro. The two made an agreement to work together by fusing together as the new identity Devilman. 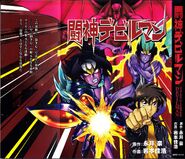 Concepts
Add a photo to this gallery

Retrieved from "https://devilman.fandom.com/wiki/Toshin_Devilman?oldid=25051"
Community content is available under CC-BY-SA unless otherwise noted.