Evil
Trolief was a minor demon who worked for Zann in the original Devilman manga. He was among the swarm of demons that attacked Tokyo after the existence of the demon race was revealed to humanity.

A humanoid demon with lumpy wrinkled skin. His face resembled a cicada's mouthpiece with small sunken eyes beneath a heavy brow.

Trolief was known to be capable of flight, though any other abilities are unknown.

After Zennon had announced the forthcoming demon invasion across the world, it took only five minuets for a swarm of devils to begin descending down upon the cities of the world, killing and destroying all they could. Among these devils was Trolief, who joined in among the apocalyptic chaos that engulfed the world.

Trolief was among the group of demons that surround Akira Fudo after he was knocked out by Psycho Jenny. He argued with the others over who got the right to kill him, but their arguments were stopped when General Zann came to ground and silenced the devils squabbles, telling them that Fudo was under the protection of none other than Satan.

Later he is seen among the group that swarm the Asuka residence when Ryo Asuka's true memories as Satan are returned by the demoness Psycho Jenny.

Trolief in the dark, in Devilman 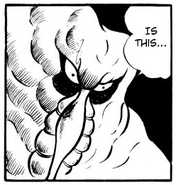 Trolief stands surprised
Add a photo to this gallery
Retrieved from "https://devilman.fandom.com/wiki/Trolief?oldid=26398"
Community content is available under CC-BY-SA unless otherwise noted.