Evil
Wagreb is a demoness who appears in the beginning of the Devilman manga. She is among the many demons who fuses with a human at the Black Sabbath orchestrated by Ryo Asuka; most importantly, it is her attack on Akira Fudo which triggers his fusion with Amon to become Devilman.

Wagreb is a large furry demon, with shell-like armour covering her body and long claws. She has no neck, with her large head instead forming halfway up her body. She has large pupiless eyes and sharp teeth. Crowning her head is the face of the human woman she merged with.

Wagreb does not display any supernatural powers, but presumably has a great deal of strength with claws to accompany it.

Wagreb is among the multitude of demons that spawn in the underground Black Sabbath held by Ryo Asuka. After merging, she grabs Akira by the head with her large claws, but he is able to escape her grasp. The fear sparked by this encounter causes Akira to lose all reason and act on pure instinct, which gives him what he needs to completely overtake Amon's consciousness when he fails to possesses him.

Wagreb's death is not shown on-panel, but her lifeless body is later seen after the ensuing massacre.

Whilst in Hell Wagreb is briefly seen in a flashback of Akira Fudo's as he remembers the various demons he fought over the years. He could be seen among a crowd of demons that included the likes of Aleda, Trijask, Ghelmer and more.

Wagreb looms in the shade 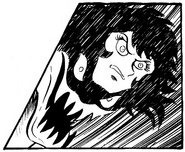 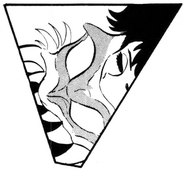 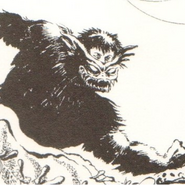