Xeed was a minor gorgon-like demon who showed up multiple times in the original Devilman manga.

Xeed was a humanoid demon with several snakes at the top of his head giving a faux-Medusa look. He has a bulky physique and thick scales covering his body. He had long nails on his fingers.

Xeed presumably used the snakes in his head and his long claws for combat.

At he request of his friend Ryo Asuka, young Akira Fudo donned a mysterious Demon Mask, and was suddenly bombarded with visions of horrific demons.

Much Later on, after Sirene was badly injured in a lengthy battle with Devilman. She flees and begs for lord Zennon to send help. In response, he sends down a small army of lesser demons to assist her and attack Devilman in her place. Among said demons was Xeed who attempts to attack Devilman, but has his arm ripped off in the process, presumably killing him. 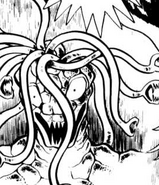 Later, as he assists Sirene
Add a photo to this gallery
Retrieved from "https://devilman.fandom.com/wiki/Xeed?oldid=23697"
Community content is available under CC-BY-SA unless otherwise noted.