General of the 100 Demon Army

Evil
Zann is one of Lord Zennon's 100 demon generals, himself being the leader of the 100 Demon Army. He is mentioned throughout the story, but only makes a very physical brief appearance.

Zann is a large demon standing about several meters tall. His appearance is akin to a traditional demon, his body is covered in a shaggy fur except for his hands, feet, head, and upper body. His chest is covered in a shell-like armour; on this shell is a large mouth in the centre and four eyes going along the top. On his head are several horns, and dark markings around his eyes. His shoulders have a scale-like pattern.

The true extent of Zann's power is never fully shown. It's known he could fly, but due to his short appearances he never gets to fully display his power.

Like his direct superior Zennon, despite his immense power, Zann prefers to let his minions do his dirty work rather than fight himself, examples being the demons Rasber and Jinmen. That being said, he is shown to be loyal to his leader, Satan, even if it meant displeasing his soldiers.

Shortly after Akira Fudo's fusion with the demon Amon, Zann orchestrated several attacks against Fudo and his friends, first sending down the sentient-web devil Rasber. The demon kills a girl and takes her body before possessing many of Fudo's classmates who proceed to attack the Devilman and his beau Miki Makimura. Akira fights them off with the help of Masa Bokuto and his gang, with Rasber taking a mocking image of Zann's body before Akira confronts and kills the demon, freeing all his school-mates from his control.

Zann wasted no time and quickly sent down another devil, this time in the form of the wicked turtle Jinmen. The sadistic demon began murdering and devouring people on trains with the assistance of Aleda and another unnamed demon. Among Jinmen's victims was Sachiko, one of Akira Fudo's old friends. Jinmen confronts Fudo and uses her undead pain to taunt him. After a amount of second guessing, Fudo bites down and murders Jinmen, killing his victims in the process.

Later on, after Zennon had announced the existence of the demon race to the human kind, informing them of their imminent attack, massive swarms of devils attacked the various major cities of the world, killing millions. Akira went out into the wasteland to do battle with demons, wanting to avenge those murdered by the demons. He killed many before being knocked down by Psycho Jenny's psychic attacks. He is quickly surrounded by a large group of demons, they squabble among themselves over who got the right to kill him. However they are stopped in their tracks when Zann comes down from the sky and tells them that their leader wanted him alive, one of the demons, a plant-like devil named Ryibyi, stands against Zann's orders, saying he would gladly ignore Zennon's orders if he got to kill Fudo. Rybyi is silenced however, when Zann tells him and the others that the order came not from Zennon, but from Satan. 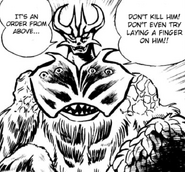 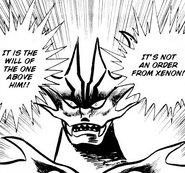 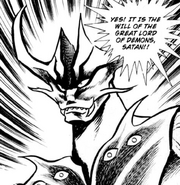 Zann silences the demons
Add a photo to this gallery
Retrieved from "https://devilman.fandom.com/wiki/Zann?oldid=26461"
Community content is available under CC-BY-SA unless otherwise noted.