Evil
Zennon is among the most powerful of the demon kind, and Satan's second-in-command alongside Psycho Jenny. While Satan was away, he assumed the role of the leader of the demon race. Zennon is highly respected and feared among his people, with most referring to him as Lord Zennon.

Zennon is massive, standing at the same size of some of Japan's skyscrapers. His main head is incredibly cunning, his body is covered in dark fur, and he possesses webbed wings attached to his arms and hooves for feet. Zennon has four heads which come from the five demons who merged to create him. The center head is horned and has three eyes and was covered in black tiger like stripes, coming from the fusion of a demon named Liger and an unnamed bird demoness. The head on the left resembles an ugly human man with black hair and has a single horn; it belongs to a demon known only by his human alias, Judah Hiroka. The head on the right resembles a beautiful woman with long blond hair, deriving from a demoness who went by Maria in her human form. His final head on his chest resembles an ogre with pointy ears. Zennon's body overall is similar to Demon Lord Dante.

Each of the demons combined with Zennon had their own special powers: flying through his wings, incredible amounts of strength, a various amount of rays for offense around all and some psychic powers such as a mental projection across the globe. He could also form his arms and wings into large mouths which he could stretch into limbs.

Zennon seemed not to care at all humanity taking relish in killing them. The body that seemed to take most pleasure in this was Judah Hiroka, who formed the Cult of Dante. While incredibly loyal to Satan, Zennon dislikes his master's feelings for the Devilman Akira Fudo seeing them as a nuisance.

It is shown that he is not as evil as one would think as while he did not care much about humans, he did care about the demons that were lost during the fight against Devilman. He also has shown a slight lack of interest in fighting the devilmen army itself as he questioned whether such a battle was avoidable.

Before his initial appearance Zennon is foreshadowed several times; the first time was early on in the story where he is discovered frozen in ice by a pair of archaeologists who are then slaughtered by a group of awakening demons. Later whilst Akira sleeps, the demon that he merged with, Amon, has a nightmare about Zennon which is the first time Akira see's the Demon Lord. He is also mentioned by Sirene and Ryo Asuka at several points, and sends Kaim to Sirene after she pleads for help. However it's not until later on that he finally fully reveals himself.

Akira suddenly gets a call from Ryo after reading the paper, telling him to look outside he quickly runs outside to see the massive demonic form of Zennon standing tall before him. Zennon who was projecting himself across the world mocks humanity and tells them that the Demon race was coming to retake the Earth and would wipe out humanity the same way they wiped out the dinosaurs. He then tells the world that the first demon attack on humanity would commence in five minutes before letting out a menacing laughter and disappearing with the laughter echoing behind.

With this and many other events that transpire, Zennon sits and compliments Satan on his plan to destroy humanity revealing how Satan had infiltrated humanity by becoming the human, Ryo Asuka. However Zennon picks out Satan's single flaw, s/he had fallen in love with the human known as Akira Fudo. Zennon reveals to Satan that he knew s/he was responsible for Amon being placed into Akira's body and angrily shouts saying how he had lost some of his best demons over it and now they had to combat the Devilman Army. Zennon, hoping for a way to avoid the war asks Satan if there was a way to avoid it. However, Satan tells him there wasn't and that Akira would fight him no matter what, and so the decisive battle began. Beyond this point, Zennon's fate is left ambiguous, and whether he died during the final battle or not is never divulged.

Zennon was mentioned only as the demon king for most of this series. After the battle with the Devilman Army, he and Satan were imprisoned within the coldest part of Hell. However when Akira and Jun Fudo were down there, only the body of the demon king was present with the three-faced head missing as was Satan. The fourth face had later devoured Ryo Utsugi, transforming into the Demon Lord Dante. With Dante's power, the demons escaped their infernal imprisonment and got back on Earth. It was then revealed that the missing pieces of Zennon's body were Judah Hiroka, his aid Maria, and the bodyguards of Lan Asuka, Liger and his companion. They later combined with Dante to reform Zennon and battle the forces of God.

Faces of the beast 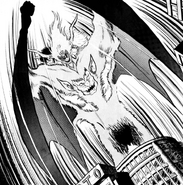 Up close and intense 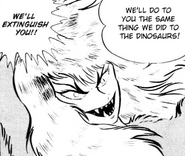 Laughing as he dissapears

Add a photo to this gallery
Retrieved from "https://devilman.fandom.com/wiki/Zennon?oldid=26517"
Community content is available under CC-BY-SA unless otherwise noted.